Harvest your own superfood in Grebbestad

Don’t we all dream of giving up our day jobs and doing something we love instead? Jonas and Linnéa did and now run seaweed foraging and marine tourism company Catxalot on the Bohuslän coast.

Jonas Pettersson and Linnéa Sjögren dive the waters of the outer Bohuslän archipelago and harvest edible varieties of seaweed. It’s all done sustainably and the seaweed grows back. They then clean it, dry it, prepare it and sell it to top restaurants, ecological and organic product retailers and sell their own small product range. You will find seaweed on the menu at some of the world best restaurants and it is a healthy and sustainable superfood.

Jonas and Linnéa also run seaweed cooking workshops that you can take part in, but first you should help them harvest the seaweed by diving for it – and they would love to show you how. Catxalot, pronounced ‘Catch-a-lot’, is all about “getting people to reconnect to the sea”.

The owners are driven by their love of nature, a passion for the environment and sustainable food:

- My interest in Swedish algae started when I read an article about it in the magazine Gourmet in 2008, but it wasn’t until 2013 something happened. Jonas and I went kayaking a lot and ate sushi salad. After a while we started to wonder if the algae in our salads was the same kind of algae we saw while paddling. We started reading about algae and experimented in the kitchen. In the spring of 2014 we were “discovered” by famous Swedish chef Tommy Myllymäki, and the rest, as they say, is history! “ says Linnéa.

The cooking classes are popular and Linnéa says they really change people’s view of seaweed as an ingredient:

- After attending our cooking classes people look at seaweed differently. They no longer see it as this scary brown-green sludge, but something tasty and beautiful! Our favourite recipe is seaweed chocolate cake, but the best seaweed dish I ever had was fried seaweed on top of miso soup.

“Is it safe to eat seaweed” is a question they are often asked. And they think its because some people believe that food is only “safe” if it is made in a cleanroom environment where it is radiated, pasteurized and put in a vacuum pack. This is a view Catxalot would like change because the processed foods many of us eat are unhealthy and unsustainable.

-   Seaweed is a superfood. It contains all the minerals we need and is rich in magnesium, iron and calcium. It also contains many vitamins; omega 3, antioxidants, trace elements, chlorophyll and a miraculous substance called fucoidan. We collect 10 different kinds of seaweed but there are even more edible varieties in Sweden, Linnéa says. How often you can harvest the seaweed depends on what species it is. Sweet kombu for example, grows incredibly fast, almost before your eyes, while rockweed grows a lot slower. This is the reason that we focus on harvesting seaweed in a sustainable way. Don’t pick more than you need and be extra careful when you harvest the slower-growing species.

Catxalot has made a business out of this sustainable superfood from the west coast and they want to share their knowledge with visitors. 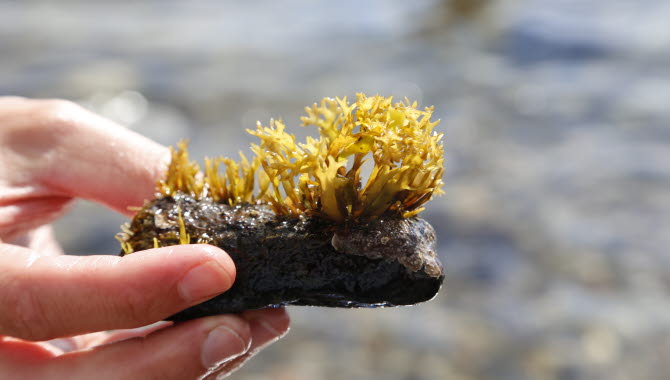 Here are a few tips from Jonas about how to keep our oceans clean:

- At least half of all the oxygen on our planet is produced in ours oceans and seas, so is a big share of the food we eat, and it regulates our climate. A simple thing to do to help our oceans is not to litter it in the first place and preferably pick up any garbage you see in the ocean, or on the beach, and dispose of it at home. Picking up and disposing of a couple of plastic bags and cans from a littered beach seems like the least we can do, but if more people start doing it we can make a difference.

Why not come to Grebbestad for some seaweed harvesting and cooking and let Catxalot  show you how?