Hjo is a small picturesque town steeped in history, where every street corner will take you back in time and space. When you stroll the cobblestone lanes in the old parts of town, around the church and the market square, you can almost picture life how it used to be in the olden days. The grid plan in this area dates back as far as to the late 1300s. Further south, along the so called "beach stroll", this was the place where fishermen back in the early 1900s used to dry their fishing nets. In 1990 Hjo was awarded the European Nostra award for its well preserved buildings in the old parts of town.

Once upon a time a medieval market place, now a city

If you want to know what a small Swedish town looked like in the 1920s and 30s, look no further than Hjo, though the town’s roots actually go much further back in time. In the 12th century, this was a stopping place for monks travelling between two monasteries, Alvastra and Varnhem, on either side of Lake Vättern. Merchants also came here to sell their wares. Over time, a small community emerged, with permanent shops and industry along the Hjoån river. By 1413, the place was so well established that we were registered and classified as a city in Erik of Pomerania’s tax book.

The building of a harbour

As Hjo grew, so did its need for transportation. So, in the mid-1800s, it was decided that the town should have a harbour of its own. Construction took four years, and the harbour was completed in 1855. Shortly afterwards, in 1873, a railway between Hjo and Stenstorp was opened, with tracks leading down to the harbour. Today, only two of the area’s original buildings still remain: Hamnmagasinet and the little Hamnvaktarbostaden, which houses one of the town’s ice cream parlours. Despite these major changes, however, the harbour looks broadly as it did when it was opened in 1855.

The old and the new town centre

The medieval town centre that emerged around the square, to the south of the Hjoån river, is still well preserved, due to the lack of any major fires, which was the reason for the destruction and subsequent reconstruction of so many Swedish cities in the past. If you look at the oldest map of Hjo, from 1696, you can clearly see the pattern of the medieval town plan, seemingly devoid of any structure, straight roads or square plots. It is a kaleidoscope of crooked buildings, big and small, all jumbled up together. The new district, which later emerged north of the river and includes the harbour area, is angular, straight, and neatly structured.

The town park, which has been given a special status, is also of national importance with regards to the cultural heritage.

Up until the latter half of the 19th century the old town area around the market square was Hjo’s finest quarter, with the town hall, workshops, trade and crafts businesses, and houses that were often two storeys high. Inside the courtyards there were outhouses, cattle sheds and stables, and coach-houses made it possible to transport items from the street into the courtyards through the gates. The further you get from the square, the lower and simpler the buildings, and those the furthest away were the homes of workmen and fishermen. You can still see the beautiful gates around the square as you walk along the main streets of Hamngatan and Långgatan, and many of the outhouses and stables still stand inside the courtyards, although today some have been converted into charming apartments. 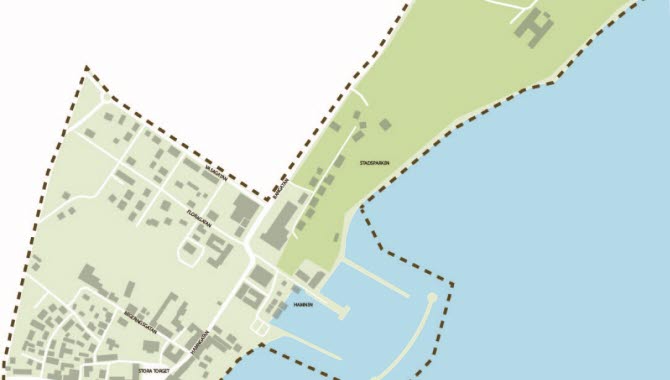 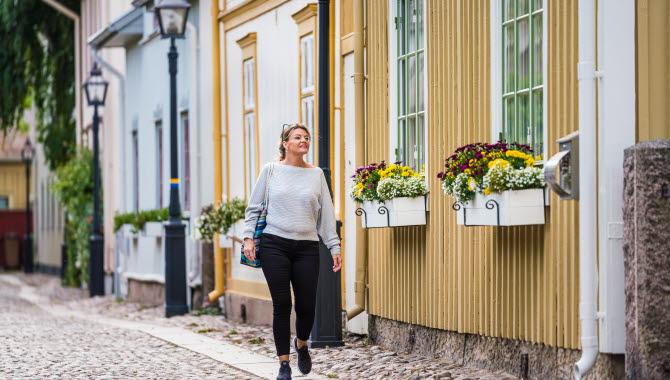 In 1990 Hjo won the Europa Nostra Award for its well-preserved wooden buildings. But which special wooden details might you see on a walk through the wooden town? Let’s start with the hand-crafted panel. Up until the late 19th century, most buildings in Sweden were made of wood. Prior to the fire of 1794, Hjo had 93 wooden buildings and one made of stone – the church. Afterwards the wooden buildings were given wooden panels. The panels were hand-crafted, i.e. sawn and planed by hand. It’s unusual to find buildings with preserved hand-crafted panels in Swedish wooden towns today. But they’ve survived here in Hjo. In fact there are around 70 such buildings. They have large or small sections with, for example, beautifully profiled hand-crafted panels. Many of the buildings are privately owned, but you can experience the architecture from the streets at the following addresses: Torggatan 8, the Lutheran Mission Hall at Torggatan 5, Sjögatan 1 and Sjögatan 6, Gästgivaregården at Sjögatan 9, Forsbergsgården at Regeringsgatan, Hamngatan 10, Kakelugnsmakaregården at Hantverksgatan 1 and Klings gård at Långgatan 10.