Islander and wood carver Tom Nilsson, "The Birdman" called by his foreign colleagues and friends, is a sought-after guest at exhibitions and conferences worldwide. Tom has birds as his specialty, hence the name, but he also carves figures and gnomes.

Tom has for the past two years been working with the forthcoming exhibition at nature museum Trollskogen, Öland with grand opening Easter 2019. He has also recetnly installed som of his famous woddcrafted birds along the nature track at Gutelia, Norway,

International Wood Culture Society (IWCS) has previously invited Tom to participate in both China and Turkey. He has also managed a trip to Switzerland where he "carved" larger birds with help of a chainsaw. In this documentary below (award-winning and that was made for the World Wood Day), Tom tells how he ended up on Skaftö and his wood carving life.

Tom grew up in Uddevalla and after school he worked as a postman and in a shipbuilding yard before he jumped on a furniture nods education. After that it became boat interiors of Windo-yard on Orust for two years.

After a while he got a job in the construction industry and made contact with Skaftö Carpenter Lasse Säfström, Östersidan, Fiskebäckskil. One of Skaftös finest craftsmen and a known Skaftö Profile himself, that among other things has become known for his fine boat building and rowing his boats over to Skagen, Denmark. But this is another story.

Tom became an apprentice with Lasse and got to work with the houses on Skaftö with all his carpentry. Tom fell for this job and for Skaftö as he likes old houses. His friendship with Lasse became a lifelong friendship and they often lunched together at the research station Sven Loven Centre's restaurant at Kristineberg. A couple of years ago he took over Ögården on Skaftö, which he has since carefully restored and rebuilt. Ögården previously belonged to the family Ödman and this was their "Captain's House". At the takeover he receive care of the cat Felicia, who can be seen on the film and often made Tom companion when he carved in the workshop.

In this documentary Tom tells about his life on Skaftö and the wood carvery that has earned him internationally recognition. (The video contains English subtitles.) 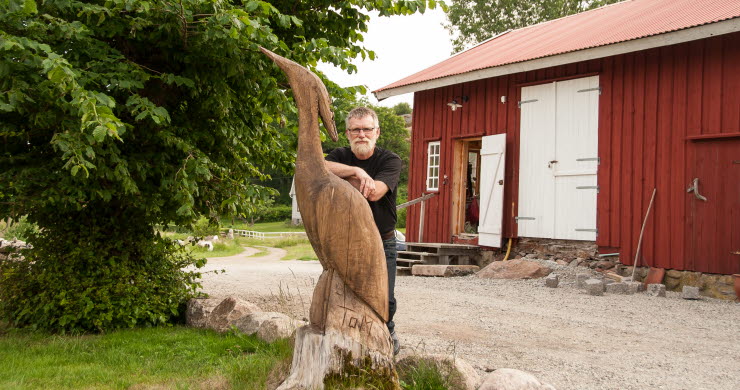 On the farm there is also the red barn, where Tom at one end has set up his woodcarving workshop. Here you will find many exciting tools, birds and figures in various stages of production. In the barn Tom plans to make a showroom, to invite other woodcarvers and artists and open it to the public. 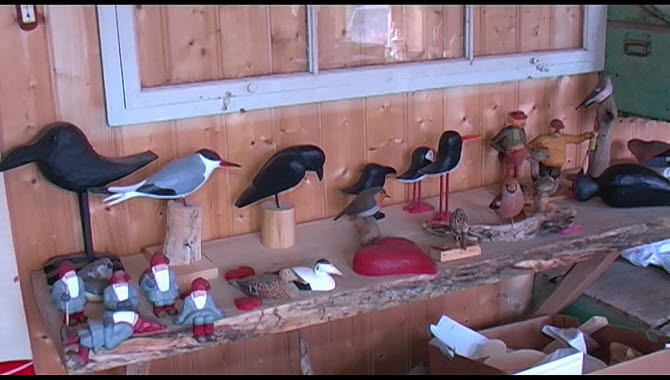 Toms birds are exhibited in many of Swedens national parks Visitor Centres such as Fulufjället, Gysinge and Kosterhavet. Tom is also represented in the Swedish exhibition "Birch". He is currently working with a big future visitor center on the island of Öland. There, Tom will not only exhibit his birds but will also produce enlarged insects x 50 in size that will be about 1.5 m high. Usually he works with larches, but here they will be outdoors and because of that tom will carve them in oak.

Toms birds and figures are available for purchase through Hemslöjden in Stocholm well as in Mora and the Bohuslän Museum in Uddevalla. 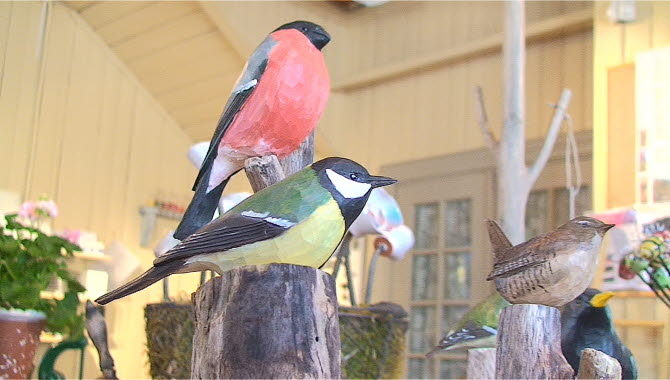 On Ögården he lives with his family, his bantams and Swedish native breed sheep that thrive and multiply rapidly. When the sheep run away for the second time this day it is time to round off the interview and Tom will have to try to collect them all and think about how he will manage to keep them on the right side of the fence. 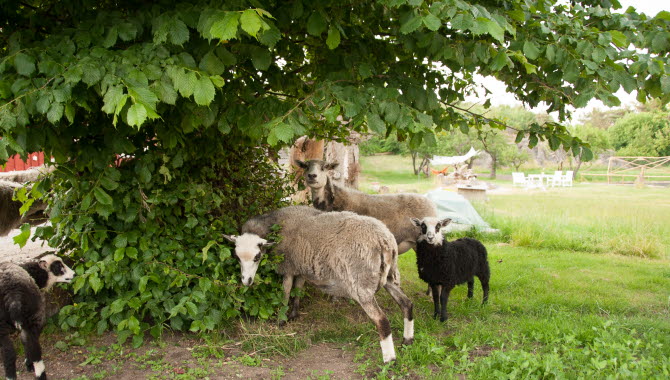