At the age of 16 he started as a deck hand and passenger assistant on Skärgårdsbåtarna (the archipelago boats) in Uddevalla. For the last eleven years, Captain Calle Thorell has guided the same company’s ships through the Bohuslän archipelago with his sure hand at the rudder. The stunning surroundings come with the job. There are few people lucky enough to spend so much time in such a wonderful environment.

“It’s absolutely beautiful here by Nordströmmarna. What I like best is that it’s a natural canal which is just there, part of the landscape, not constructed. The surroundings really do vary a lot; one minute you’re passing through lush places, rich in wildlife and very green, and 20 minutes later you’re in a rugged, rocky landscape, typical for the area,” says Calle.

Calle was born and raised in Lödöse, a small village forty kilometres north-east of Gothenburg and just a stone’s throw from Göta Älv. Generations of the Thorell family have spent their life on the sea, including skippers, lifeboatsmen, fishermen and so on.

“I saw the canal traffic gliding past as a boy, so my first words were actually “boat” and “lamp,” says Calle. 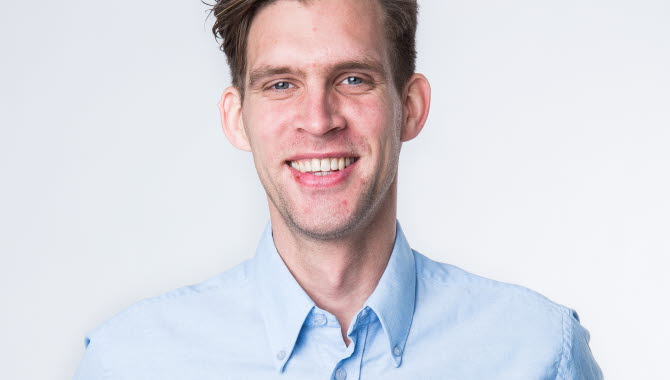 Mooring hand from the beginning

Ferries have sailed around the fjords in this area since the nineteenth century, and with this background it was hardly possible that a boat-crazy young man could imagine any other job than at sea. As a 16-year-old Calle started work as a mooring hand or “Jump ashore Jim”, though his real job description was a deckhand and passenger assistant. Duties included taking care of the passengers on board, charging for tickets and throwing the mooring line. Already at this stage, Calle took his first step towards the position of captain.

“The captains would let me steer the boat even at that age. One of them was joking and said, “When I’m resting in peace you can take over.” I remember thinking, “Wow, it would be possible to train for this - what a dream job!”

Happy to help out

Skärgårdsbåtarna run day trips in the Uddevalla archipelago and as far as Ljungskile. During the summer (July and one week in August) there are also crossings to Smögen (via Bassholmen and Lysekil) and Käringön (via Bokenäset). The fleet is also available for tailor-made conference/wedding/ball crossings, to mention a few of the possibilities.  Despite the fact that he literally steers the boat, Calle has nothing against helping out with other tasks during the crossings.

“I usually polish the cutlery or work in the bar on Christmas tours, for example. It is fun to do something different from time to time.”

Apart from working in such an amazing environment, what is the best part of being a captain on Skärgårdsbåtarna?

“It’s probably when something unexpected happens and you have to concentrate a little more than usual, such as rough seas and hard winds when we are mooring. And it’s a fantastic team - I’ve worked with some of my colleagues since I was 16 - so we have really become friends for life,” says Calle Thorell.

This small island is part of Uddevalla municipality, but is closer to Skaftö/Lysekil, and is a real gem. There is no all year round accommodation, but there is a guest house that our company rents out if you want to have a cosy weekend, for example. Bassholmen has a marvellous local museum and an atmospheric waffle café which is open daily during the summer. There is also a fantastic nature reserve and great opportunities for kayaking.

You can get here with Skärgårdsbåtarna’s Ljunskile crossing. You’ll find great food, good swimming places and, above all, incredible concerts that are so up close and personal it feels like you’re sitting on the stage. Some of Sweden’s best artists come here to play every summer. I would really recommend taking the boat here and booking a night at the guest house to see one of the concerts.

I was actually there the other week and went on one of the walking paths. The scenery there is in a class of its own: fantastic sandy beaches, boulder ridges and freely grazing cows. If possible, though, go there just before or after the summer season - it’s even more magical when there are fewer people around.

This is Sweden's oldest seaside resort with a lot of history in its streets and buildings. People have been coming here since the end of the 18th century to drink the water from the natural spring. It was believed that the mineral-rich water could cure all manner of diseases. Our Uddevalla line operates daily to Gustafsberg. There is a really wide range of activities here: outdoor pools, beach volleyball and great kayaking, to name just a few.

This is also a wonderful traditional seaside resort. Lyckorna is easily accessible by boat or train from Gothenburg. The fabulous Mussel Bar restaurant is located here.