On this stage of the Kuststigen between Hunnebostrand and the Sote Canal/Ramsvik (Soteleden stage 4) there are plenty of monuments and remains, reminders of this area’s important stone cutting era.

Terrain: small roads, villages and a crossing over a pontoon bridge.

In the footsteps of the stone cutters

On this stage, which is the same as stage 4 of the Soteleden, there’s a wealth of nature and cultural experiences bringing to life the people who used to live in the area. From the southern part of Hunnebostrand walk via a pontoon bridge to Hunnebo Lera and on through farmland near the island of Ödby and finally to the bridge at Ramsvik.

For anyone interested in history, a visit during the summer to the heritage centre at Gammelgården and the Stenhuggeri (stone cutting) museum in Hunnebostrand, is a must. The trail here leads through leafy forests, pastures, and occasional hilly sections.There are many ancient remains, such as a Bronze Age grave at the top of Röseberget hill by Gammelgården. 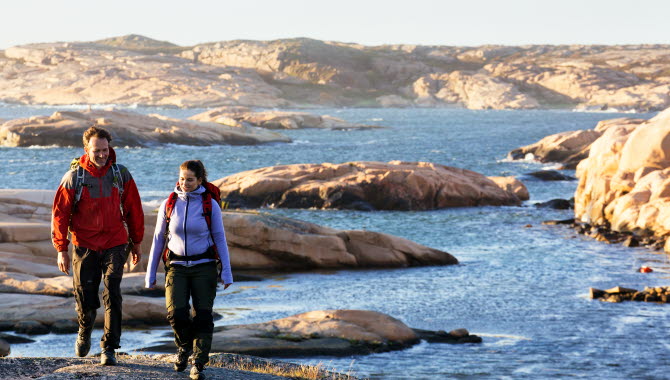 The Sote Canal was built to protect seafarers from the dangerous Sotekär shipping channel, where many seamen lost their lives. In 1935 the work was completed and the canal was opened by the crown prince at that time, Gustav Adolf. The canal, which is 4800 metres long, stretches from Kungshamn in the south to Hunnebostrand in the north, and separates Ramsvikslandet from the mainland by a movable swing bridge. Nowadays the canal is used mostly by recreational boats, as many as 50 000 every summer.

Just north of the bridge to the mainland lies “Mor Lenas stuga” (Mother Lena’s Cottage), a little stone cottage definitely worth stopping at. It was built in the 1700s and Lena and her two sons lived in it for many years. They lived off what the sea provided and also collected flotsam and jetsam. The cottage stands there today as a reminder of times gone by. Have a look inside if you’re passing! The cottage is maintained by the Sotenäsgillet local history society.

The stage is 5.8 kilometres in total.

It takes around 1-2 hours to walk this stage. 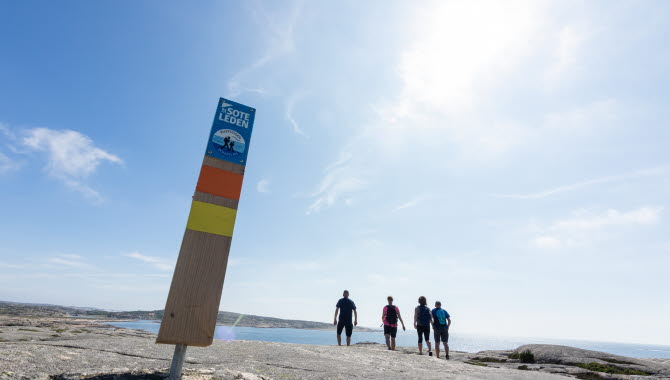 The trail is classed as easy/moderate

The hike starts at Gammelgården in Hunnebostrand. There’s a car park on Lökholmsvägen road and the Gamlegården bus stop is also found there.

The trail goes through the county of Sotenäs. Travel here by bus and car. By car it’s approximately 90 minutes from Gothenburg and by bus from Uddevalla, changing in Hallinden, it also takes around 90 minutes.