The island with smooth rocks and sea swimming

Hållö is a shimmering jewel of pink granite, only a 10-minute boat ride from Smögen. As well as sea swimming and the obligatory dip in Marmorbassängen (the marble pool), you can see Bohuslän’s oldest lighthouse, walk on smooth rocky outcrops between two giant's kettles and stay at a hostel in a refurbished radio communications building.

The marble pool and giant’s kettles

The first thing you notice in the Hållö nature reserve are the beautifully smooth granite outcrops, slowly ground into works of art by ancient glaciers. You can find your own space here for sunbathing and swimming. Hållö lighthouse is open during the summer and offers guided tours. There are smooth cliff edges to jump from and steps down to the clear turquoise waters at Marmorbassängen. To the south of this lovely swimming spot is Kålhälla, where lighthouse keepers used to live. There are several giant’s kettles around Slättehälla, one of which is four metres deep! During the last part of the ice age, rocks were gouged out and large parts were carried to the sea, which you can still see when you visit the island. 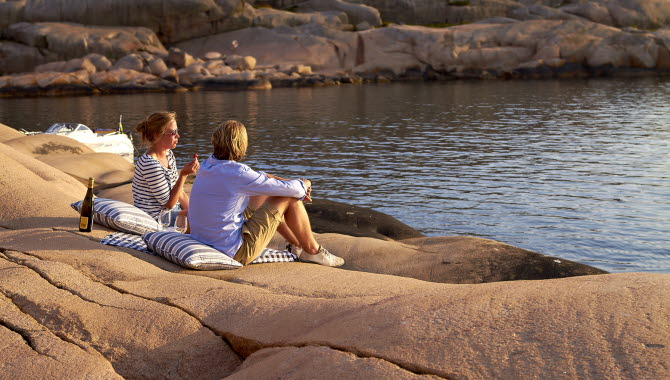 The old radio communications building to the south of the lighthouse has been rebuilt into a youth hostel called Utpost Hållö, which also has a conference facility, a banqueting room, a chapel, a naturum and a café. You can enjoy ice cream and coffee in the café a few steps from the hostel. After savouring a locally-produced meal from the “Blue Pantry”, you can have a relaxing sauna with the sound of waves in the background.

The easiest way to get to Hållö’s smooth granite rocks and sea swimming is on the Hållö ferry from Smögenbryggan, or on the Hållö express from Kungshamn. The ferry leaves daily every half hour from Smögen during the summer and every hour from Kungshamn. If you want to visit the beautiful Bohuslän archipelago to go sea fishing or join a lobster or crayfish safari in the season, the easiest way is to book a place with Smögens fisketurer (Smögens fishing trips). Enjoy your catch with a cup of coffee in the boathouse, where you can listen to one or two fishing yarns! Hållöfärjan also offers family fishing trips inside the archipelago on most evenings in the summer.

A bright 175-year-old and the Taube family’s tragedy

Hållö lighthouse was lit for the first time on 1 November 1842 and in 2017 the Hållö Lighthouse Association celebrated its 175th birthday. Read the fascinating history of how the light source has changed from the original oil lamp to the current LED. Try counting how many steps there are to the top of the lighthouse! 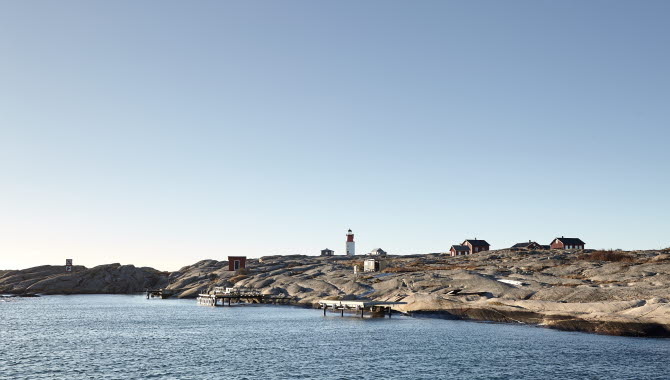 Evert Taube was a frequent guest at Hållö between his travels and one of the lighthouse keepers on the island was Evert's uncle, Edvin Jacobsson. Evert’s brother Gerhard Fredrik died tragically in a fishing accident off Hållö, together with the lighthouse keeper and the lighthouse assistant.  One of Evert Taube’s most famous ballads is about a ship which ran aground at Hållö: "The Ballad of the Blue Bird of Hull", which Thåström and Imperiet popularised in the 1980s.

And did you know that during the Second World War a Swedish civil aircraft, a DC 3 Gripen, was shot down by a German fighter over the Skagerrak? Only two of the aircraft’s 15 passengers survived when it crashed on the island near to Kålhagen.