The wold lies on the other side of the lock

In the mid-19th century, thousands of people around Dalsland subscribed to shares in Dalslands Kanal-Aktie-Bolag. This is thought to have been Sweden’s first publicly traded stock. The canal was a much longed-for waterway that connected the landscape and its inhabitants. The canal was inaugurated in 1868 to great fanfare, becoming the blue band through green forests, paving the way for a brighter future, as it continues to do today.

Dalsland’s industrial history begins with the ironworks of the 17th and 18th centuries. It was a success, despite the hard work needed to transport the iron ore from Bergslagen by boat and horse and cart. Once processed at the mills, the same arduous journey had to be made to Gothenburg and then out into the world. If the goods could be loaded directly onto the ships at the mills in Lennartsfors, Billingsfors, Upperud, and Fengersfors and shipped all the way to the North Sea without having to be reloaded, the costs could be reduced, and a lot of tiring work could be avoided. 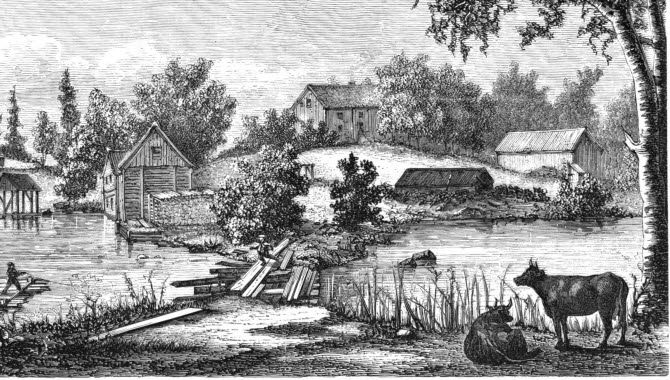 A canal for all Dalslanders

Carl Fredrik Waern grew up at Billingsfors mill and successfully ran Bäckefors mill and Baldersnäs. Although he led the demands for a canal, it was his son, with the same name, who became the first CEO of Dalslands Kanal-Aktie-Bolag in 1865. Dalslanders went out of their way to support the project – they all understood the importance for everyone living in Dalsland. The Swedish National Archives contain the preserved subscription lists for the shares. They are impressive, and evidence the people’s involvement in the construction of the canal, regardless of whether one lived by the canal itself or many kilometres away. For over a century, the government in Stockholm was reluctant to build a canal through Dalsland. However the union with Norway (which was not a smooth one, it has to be said) required some form of action in the border areas in the western part of the country. The great canal and railway genius of the time, Nils Ericson, was tasked with building the Dalsland canal. Retired, medaladorned, and suitably acclaimed, he was done with his career and wanted to
retire to Nygård manor outside Vänersborg. 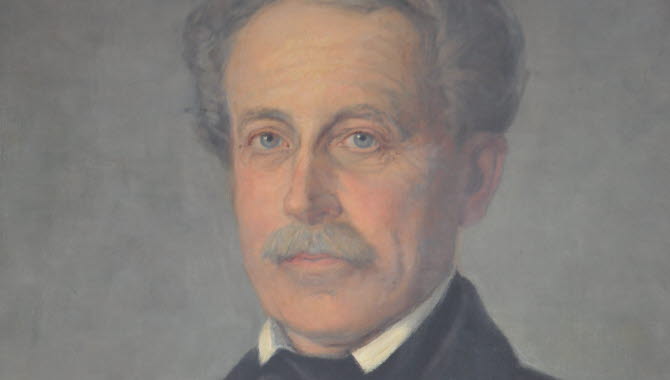 Nils Ericson grew up by the Göta canal. He expanded the locks in Trollhättan, built the famous Slussen in Stockholm and the Saimaa canal in Finland, and managed to build the western and southern mainlines on time and on budget. But there was one thing he’d never built – an aqueduct. Perhaps it was this near-impossible challenge that finally made him accept the assignment. No one believed it was possible to bring ships around Håverud with its rapids, soft rocks along steep slopes, and a height difference of ten metres. But he dared to defy the odds! 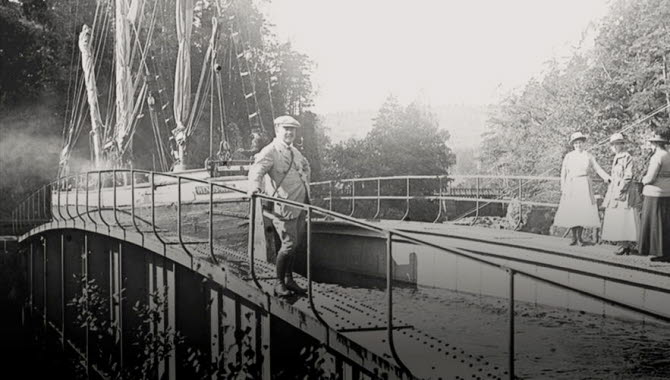 A bridge made of water and iron

The Dalsland canal was built in just four years, on time and on budget, connecting lakes and rivers to a navigable waterway by way of a 12-kilometre canal. At locks 19 and 20, above Billingsfors, it’s clear how the canal and the two lock basins ensure a smooth journey for ships, right alongside the roaring rapids.And what came of Ericson’s big challenge? Well, he ordered an aqueduct from Bergsunds Mekaniska Verkstad in Stockholm – a 33-metre long iron bridge filled with water to enable ships to avoid the rapids and head down the string of locks alongside the mill on Håverud on their way to Upperudshöljen. The power of the rapids was harnessed by the Håfreström paper mill, which built a power plant that’s still in use today. But that’s another story. 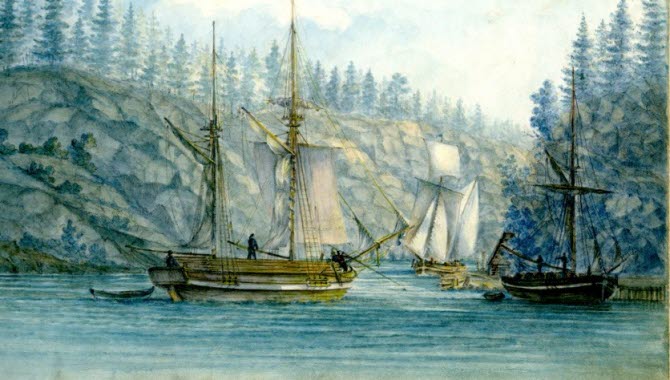 The Dalsland canal with its 17 lock stations and 32 lock chambers is still in use today. It’s a paradise for visitors coming by boat or canoe, just for the day, or for a month’s holiday. However, on the canal’s 100th anniversary, things didn’t look quite as rosy. The beautiful stamp featuring the aqueduct looked to be the last memory. The barges had stopped sailing, the galleasses with their sails hung from giant masts had been chopped into firewood, and the log jams were no longer floated on the water, but transported by truck. But the Swedish Holidays Act paved the way for a brighter future for the canal. Thousands of visitors from around the world come to see the beautiful aqueduct, and travelling the locks is fun and exciting for the whole family. Even a dinner of freshly caught fish can be part of the holiday adventure. 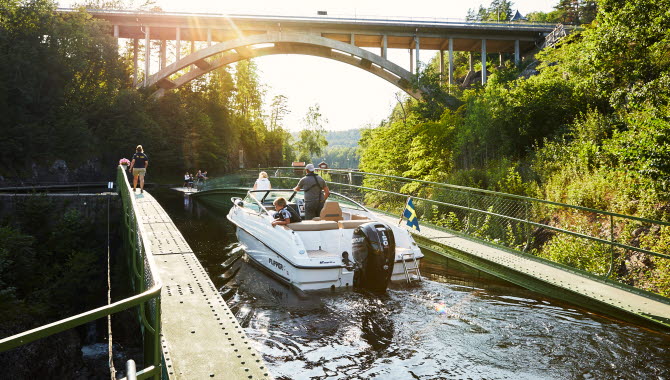 A journey through the locks to get through the canal system is also a journey through time. The stones of the lock basins, the iron of the gate mechanisms, the 33,000 rivets in the aqueduct – many of these are original from 1865 and are testament to the craftsmanship of the time. Photos from the past show hand-operated locks in Upperud next to the canal office, which was completed in 1868. Beyond this, much is still the same. There is still a hand-operated lock in Buterud – one of the canal’s nicest places. The silence, the calm, and the unique tempo of the lock live on along the Dalsland canal, just as it has for the past 153 years.