Jesper on Skaftö runs Classic Yacht Service AB in Grundsund, where he repairs and builds wooden boats on demand as White 23, Stjärnbåt (the wooden forerunner of the star boat) and of course the sailing dinghy Skaftö.

Jesper was born in Stockholm, grew up in Kvarsebo, Norrköping, where he also met his wife Helena. They moved to Skaftö in the mid 90s. The family took over the Marina in Grundsund in 1987 and Jesper worked at the marina while he took courses in boat building at Gerlesborg and Henån.

In 2008 Jesper started Classic Yacht Service. The company will according to Swedish Companies Registration Office focus on the construction of yachts, repairing and maintenance of ships and boats, joinery and - performing arts! We will return to the artistic activities later. 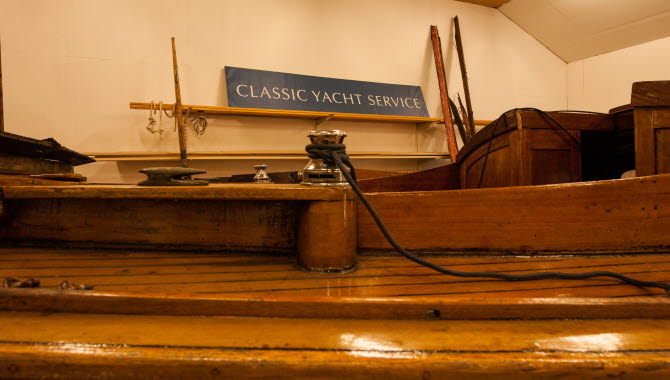 - Yes, that's neat! Jesper laughs. It came up when I worked with an Englishman here for several years. The name was supposed to be able to work on a more international level. And yes, Classic Yacht, it's classic yachts that I work with.

- I have always had an interest in boats. We lived by the sea in Kvarsebo, so the interest came naturally. Then I also think that wooden boats are beautiful to look at, pleasant to be in and to sail with. When I took the course building boats in Gerlesborg with Sven Johansson, we worked among other things with Viking ships. Viking Boats may not have felt quite right at the time, but historically it's the craftsmanship that the ships today are based on. How to shape the wood, clinker-built boats, the whole craft with a traditionally built boat, at least the hull is the same today as in those days.

- Some advice for wooden boats is of course to try to get them into the water as soon as possible before the spring sun dries them out. But most people know that. I also think it's important to try to fix small things every year in order to avoid the situation of not having time to get the boat into the water. The boat in the water is very important when it comes to wooden boats. 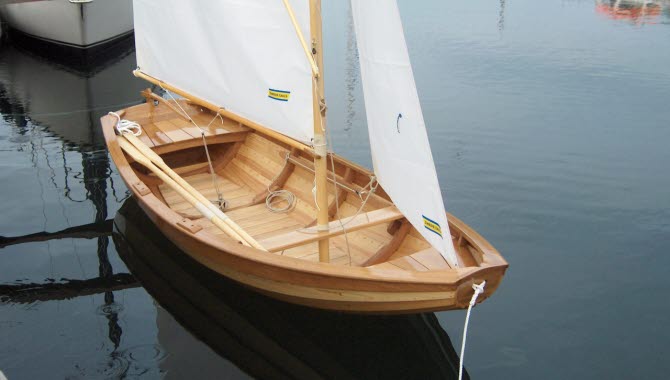 Except from the sailing dinghy Skaftö Jesper also builds the boats Stjärnbåt and White 23. 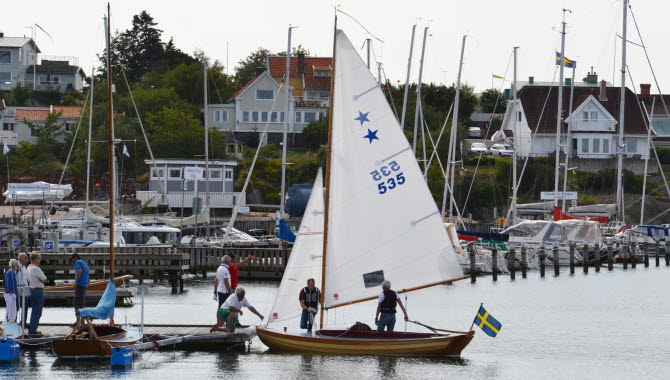 - The latest boat I built was a Stjärnbåt which was designed in 1913 I think. I got an order for one of those, and then such a wooden boat had not been built since the 1970s, so that was pretty special for me, but there were drawings plus a large enthusiastic group of people in Nol, Gothenburg who cheered and helped in many ways. The ”Stjärnbåt syndicate” in Nol is where everyone with these kinds of boats gather and repair their boats. They know and do a lot of the work themselves and it is almost the whole point of having this type of boat to meet and fix the boats together. You can call it Stjärnbåt kindergarten for old men, Jesper laughs. Sometimes he himself is one of those involved there.

Stjärnbåt is a classic boat. Many famous sailors started their career in the Stjärnbåt, eg, Peter Gedda, Pelle Pettersson, John Albrektsson, Peter Norlin and the brothers Sundelin among others. 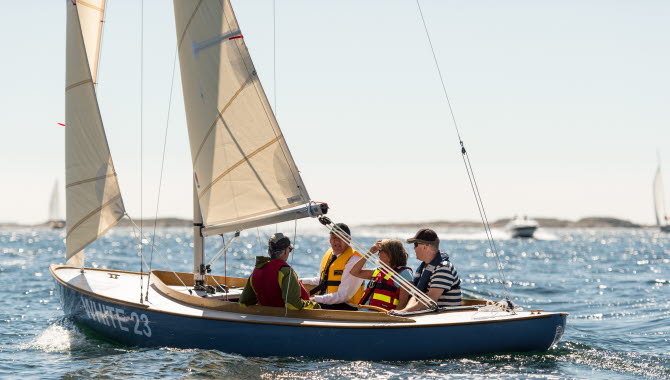 White 23 was ordered. The boat was designed in 1992 by the American Joel White. It is a fast, beautiful and comfortable day sailer.

- Joel White is no longer alive, but he designed a lot of boats, mostly sailing boats and quite large boats. This one is 23 foot and probably one of the smaller boats he designed really, Jesper says. Joel White worked with designing till very late in life. White 23 is a pretty day sailer which also is a quick and convenient and beautiful boat to look at. These were the conditions Joel designed it after. I had a client who was interested in this particular boat and was involved both in finding drawings and the actual building of the boat during the construction of White 23.

- It is a beautiful and special boat and it got a lot of attention a couple of years ago at the Gothenburg Boat Show. The interest in this type of boat, day sailer, has grown. It is easy to bring on a boat trailer. As it can be tricky to find a berth today, it is quite practical to be able to bring the boat and thus sailing becomes quite accessible with it. This, and the fact that it is a very beautiful boat to look at made it attract attention at the Gothenburg Boat Show. It takes a whole winter to build this kind of boat. Lund Sails sewed the sails in Gothenburg and it was an aluminum rig, we put on the boat. A very modern boat, the hull and deck was built in epoxylaminated cedar.

Jesper and the music

Bill Haley's "Rock Around The Clock" means a lot to Jesper. That song has shaped him musically. Jesper tried the recorder at school, but it did not work out quite right so eventually he  started playing the guitar. Today Jesper plays in some different group constellations, but mostly it is with the blues band B'loose. They have played together for 25 years. B'loose plays both blues classics as well as their own material. 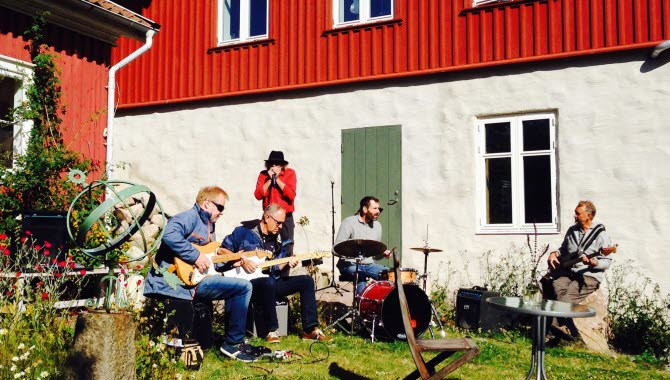 Working with varnish that lasts for 10-15 years

Jesper uses and sells XtreemCoat lacquer. A coating that is flexible, that doesn't crack unlike conventional varnish that easily cracks in the sun if you do not maintain it the whole time. In other words, you can extend the maintenance for a long time with this varnish. 10-15 years. Simply more modern technology.

However, working with the boat is part of having a wooden boat. What about the maintenance-free options then?

- Anyone who wants to varnish every year and think it's fun, and, yes, many do, it's almost therapy. They are not supposed to use this varnish. But, if you do not have time or feel that it's too hard, this may be an interesting option, Jesper says .

- Finally, is there any wooden boat that is more common than other (wooden) boats on Skaftö?

What kind of boat do you, Jesper, have?

- I have a small motor boat. Yes, the plastic one! That's what I have time for in the spring. I have some wooden boats as well, but they are not really in condition to use right now. So to be able to get out at sea, we decided in the family that it had to be a plastic boat, Jesper laughs.

- Whoever wants to know more about Jesper's work with wooden boats can read more about it on Classic Yachts Service website.