Gospel Concert in the church in Grundsund on July 27th.

It's time again for the summer concert in the church in Grundsund with the Summer Choir led by Anki and Magnus Spångberg and this time with the guest artists Triple & Touch and Ntombenhle Shobede.

For many years the church in Grundsund is filled to the brim with visitors who want to experience the very popular gospel music concerts which the former cantor at Skaftö, Nina Norrman, arranged with her church choir Salta Vindar and the gospel experts Anki and Magnus Spångberg from Örebro. Beautiful singing, rousing gospel music and guest artists such as the eurovision song contest winner and now sing leader, Sanna Nielsen, Cindy Peters, Christer Sjögren, Sonja Aldén, Shirley Clamp and Triple & Touch, who make a comeback this year.

Today the summer/ gospel concerts are organized by the choir Salta Vindar. Nina Norrman lives in Oslo, and from there she says that the origin of these popular summer concerts was that she was contacted, when she was a cantor in the church, by Anki and Magnus Spångberg with an inquiery, if there was an interest in having a concert in the church with Cindy Peters and Örebro Gospel. Nina answered that of course there was interest in that. However, wouldn't it be possible to extend it to some gospel days where you invite singers of the choir and summer residents on Skaftö, who like to sing, to join in and sing together? So it was and that is why it is called the Summer Choir on these occasions.

Triple & Touch have been guest artists at the concert in the past and will thus be back again this year. "There will be a little different touch this year as they are working on a project called Star For Life, which is a project they have in South Africa, where they invite South African young people who come here to Sweden and do concerts together with Swedish young people. This year there will be a girl from South Africa, Ntombenhle Shobede, who will give a slightly different spin to the concert on July 27th "says Nina.

At a ceremony earlier this year at the Royal Castle Ken Wennerholm and Goran Rudbo of Star for Life received the King's Medal in a blue ribbon, for the development of Star for Life in South Africa and Sweden.

Ken Wennerholm from Triple & Touch says "We have a guest artist with us who come from South Africa. She ia a girl who has been in Sweden many times with the young people who usually come here and sing with Swedish artists. Her name is Ntombenhle Shobede and we met her ten years ago in the very first school that we started working with in South Africa. "

"The school is located in the bush and when we met her she was 15 years old and she sang wonderfully. She went to school every morning, two hours to come there and two hours to walk home. She fought fantastically hard and we knew immediately that, somehow, we must use her musicality. "

"Despite poverty and disease and all included when you live in those AIDS-affected communities where nearly a whole generation of parents basically is gone, the younger people still have a treasure and that is their singing and the music and the dancing and the energy. That is what we have focused on. The strange thing is that these young South Africans inspire young Swedish people and the Swedish audience with their joy and energy, which we and Swedish young people might have lost even though we have such a good and rich life. What is special with Ntombenhle Shobede is that she has just that little extra, an artistic talent in itself and that is why she is in Sweden now to record an album with Swedish and British producers, and she will be promoted more here eventually as an artist. "

The vision of Star for Life is to motivate and inspire young people to better lives and greater optimism. Young people are encouraged to focus on their education and take care of their health. In South Africa and Namibia the program is used to reduce the spread of HIV and AIDS. 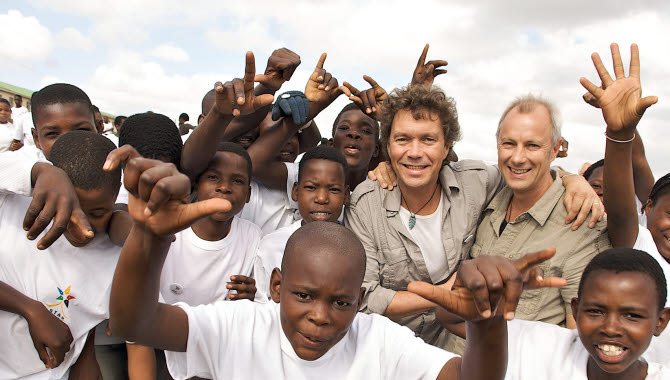 About returning to Skaftö Ken said that it is "Nice to come back to Grundsund! Especially in the summer. Churches is such a great place to play in and working with choirs is rewarding and brings much joy and warmth. Ntombenhle Shobede will add some extra spice ".

The Summer Concert in the church in Grundsund will be held on July 27th at 18:00 with an extra concert at 20:30. Tickets will be sold from June 24th until the day of the concert at Skaftöhallen in Fiskebäckskil and at ICA in Grundsund. The price for a ticket is 200 SEK.