Rågårdsviks Pensionat has been a meeting place for people since 1926. This year, the guset house turns 90 and it was celebrated with champagne, canapés and mingle while Katarina Wilandh talked about what it was like to grow up in Rågårdsvik.

In 1926 Berta and Simon Samuelsson started the boarding house which is still run by the same family. Simon had several years earlier opened a grocery store down by the harbour in Rågårdsvik.

Many boat owners anchored in the harbour had asked for the possibility to stay overnight and for a place to eat. Simon managed to get in touch with the farm owners who had emigrated to America and bought the farm with the cow shed. The guest house business first opened in the small glass veranda in the summer of 1926. After an advertisement in the booklet published by the Swedish Tourist Association "Hotels and guest houses in Sweden" more and more families discovered the peaceful guest house with its good food and beautiful garden with a wonderful view of the Ellös Fjord. 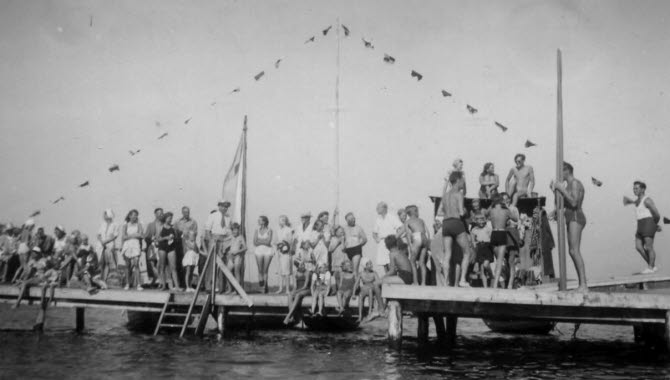 Of course, "Bräckas" with both the smooth rocks and nice sandy beach for the children contributed to the beautiful atmosphere. The good reputation quickly spread and, during the 30's fine summers, families from across the country came to enjoy the sun, the salty water and the good food of the guest house. 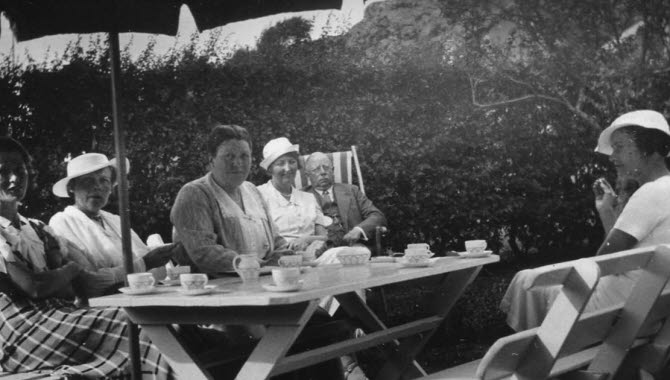 The set-up was fantastic - a plentiful breakfast was served at nine o'clock. After swimming and perhaps a boat trip dinner was served at three o'clock with the smorgasbord, main course and dessert, then coffee in the garden. After that it was nice to rest a little. People did not stress around in the thirties! Half past seven, it was time for supper, which consisted of a sumptuous dinner table. All the good food demanded an evening stroll called Grötlunken (Porridge walk). In the thirties the farmers' supper consisted mostly of porridge, hence the name Grötlunken which the walk is still called.

During the war years of the 40s, when Europe was closed for holiday travelling, Rågårdsvik was a great place to spend your holiday. Sweden was not at war, but restrictions and rationing affected us Swedes as well. The guest house which had kept the farm's cowshed had their own cows, pigs and chickens and therefore they could cater for the most delicious dinners.

Berta and Simon's children, Inez and Tage, had taken over the business. Tage as a chef in the kitchen offered locally produced tasty dinners and Inez tended to the guests' weel-being. 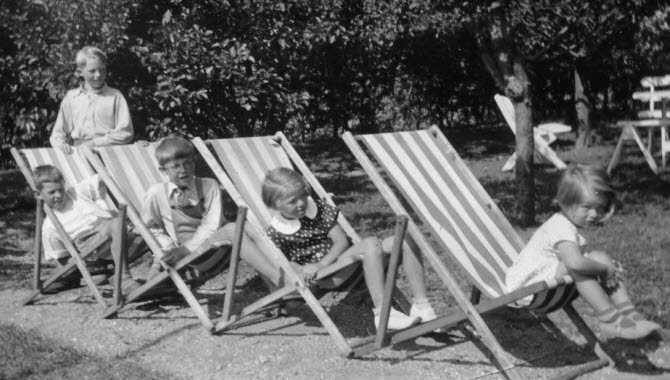 The garden, a real oasis widely used for socializing with croquet and badminton games.

The rooms in Gula Villan (the Yellow Villa) were no longer sufficient for all guests. I was depression times in Sweden and now many locals in Rågårdsvik could get some extra money to the family income by letting rooms to summer visitors who had their meals served at the guest house.

Today there are many summer visitors who have bought and built houses in and around Rågårdsvik. Many are descendants of families who stayed at the guest house in the late 20s. Most summer residents use their houses all year round. They spend holiday at autumn, picking mushrooms, go fishing lobster and celebrate Christmas with skiing and skating if weather permits. Around Easter they start coming more frequently to enjoy lovely walks, golf and later to experience how nature awakens. Summertime, during the high season for the guest house, many of those return year after year. 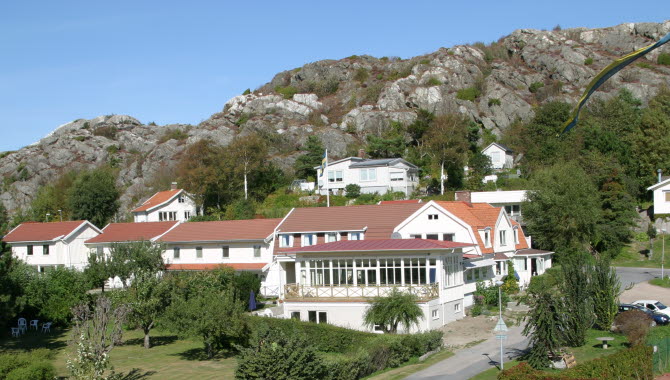 Inez's children, Kjell and Florence, are the backbone of the guest house today with two younger generations involved. Summer is obviously an intense period, but business is booming year round with birthday parties, weddings, meetings with people and conferences in the peaceful atmosphere of Rågårdsvik. The guest house has grown to be the "best conference facility" according to Congrex 2010. There are 24 rooms with a total of 48 beds. All guest rooms have a shower and a toilet, and almost every room has its own entrance from the lovely garden. In the relax area there is a jacuzzi and a sauna. All meals are served in the bright and beautiful dining room with a view over the houses and the sea. There is room for 110 guests. The food is always tasty with the sea as their main source of inspiration. The restaurant is not only open for the guests at the guest house. In the summer, it it is open for both lunch and dinner for all hungry people. What is more summer than strawberries with homemade ice cream after a perfectly prepared fish dish or coffee with a freshly baked cinnamon bun in the garden? Long live Rågårdsviks Pensionat!