One of the most beautiful waterways in Europe

The Dalsland canal is considered to be one of Europe's most beautiful waterways since it largely consists of natural lakes that are linked by locks and small waterways. Enjoy this lovely canal in your own boat or take a tour on one of the traditional canal boats.

The Dalsland canal is rather like a sting of pearls - small and large lakes, coves and fjords joined together by 12 kilometres of man-made canal. The total distance is 250 km, including 31 locks in 17 locations, giving a total drop in height of 66 metres. The easiest way to see the canal is to join one of the passenger boats, M/S Storholmen or M/S Dalslandia, which also serve great food during the journey.

The story of Göta Canal and how Baltzar von Platen managed to connect two seas in the early 1800s is widely known. Less well known is Nils Ericson, a well-reputed canal and railway builder who hatched the idea of the Dalsland Canal some 150 years ago. He had the audacious idea of building an aqueduct in the form of a long metal trough to surmount the difficult passage in Håverud. The result was a 33.5 metre-long trough, joined together by no less than 33,000 rivets. The fact that both a rail and a road bridge pass over the aqueduct makes it even more spectacular. 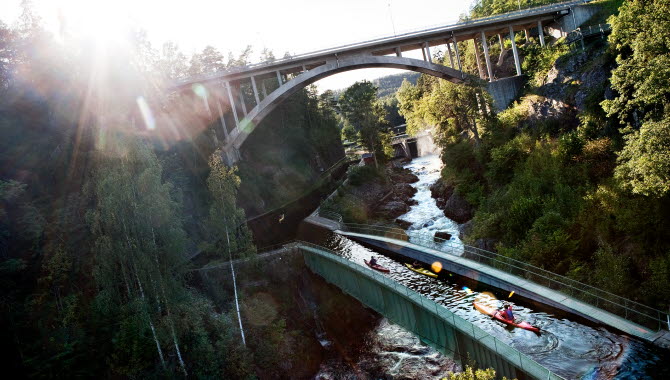 With the construction of the aqueduct, King Carl XV was able to inaugurate a continuous waterway from Töcksfors in west Värmland all the way to lake Vänern in 1868. However, a railway was built in Dalsland only 10 years later, and canal boats gradually became obsolete. In December 1971 two cargo vessels, Balder and Lindö, passed through the locks for the last time to the smelting plant in Vargön.

For all pleasure boat owners who want to enjoy the peaceful countryside of Dalsland, the canal is an ideal way to travel, and Håverud is now the most popular section with hundreds of thousands of visitors every year.