It's time again to pay attention to the port and canal construction in Grundsund. On July 23rd there is the annual canal festival, which includes refreshments, entertainment with music, lectures, competitions and the canal relay race

100 years ago there were a large number of cutters at anchor outside the breakwater. There were boats with names like Primrose, John Webb, John Morley, I Will, Spero, Moonlight and more. They had been bought from England by fishermen from Grundsund. The smaller boats they had had earlier had been replaced. Now they could go farther out at sea to go fishing. Some were cutters for transport. Back home again home, they could not go into the shallow harbour. That was one of the reasons why members of parliament and representatives, with vision, in the town council decided that there had to be a new port in Grundsund.

It was back in 1886 as a member of parliament on Orust applied for money for the study of the harbour area in Grundsund. He got 650 SEK. The following year the survey was done. In 1892 the issue of dredging the harbour area was discussed at the municipal meeting but nothing happened.

In 1911 parliament approved of money to develop some ports in Sweden. Grundsund was one of them. In 1913 Grundsund was granted a state aid of 650 000 SEK. The condition was that the land closest to the canal was to be handed over to the state without compensation. The idea then was that no single person should own land around the port area. Instead the land was leased to those who needed land for their living.

There were two proposals of a harbour.

The first one was to expand the port westwards and construct a breakwater between Ösöholme and Deckors näsa and dredge the inner part of the former port. The other option was to dredge the existing harbour basin and build a breakwater where it is now but without land connection. 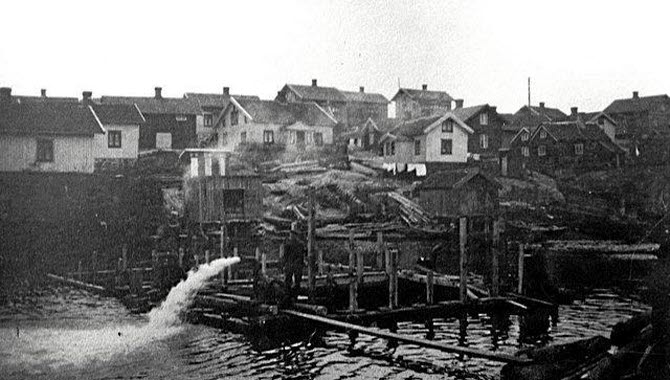 However, it was the third alternative that won with a canal through Grundsund.

Work began in January 1914 and was completed in 1918. How the work was done can be read in a special booklet published by Skaftö Öråd. It can be purchased at the canal festival or at ICA in Grundsund. It costs 40 SEK. 20 SEK of the revenues will be donated to the Children's Cancer Foundation.