The ruins of one of Sweden's oldest churches lie on the hill behind Varnhems monastery; a private farm church from the Viking Age. The place is called Kata Farm and archaeologists have made sensational finds during their excavations, which describe the area from the time before the monks arrived in the 12th century. The church's crypt may well be Sweden's oldest preserved room.

The name Kata Farm comes from a woman whose skeleton is one of the greatest finds made during the excavations. Kata ruled at the large farm during the end of the Viking era. The excavations led to a change in accepted Swedish history, since it proves that Varnhem became Christian one century earlier than the rest of Sweden.

An information building has been erected at the excavation site, where modern architecture is joined to one thousand year old walls. Walk around the finds and see some of the graves through glass sections in the floor; in particular, Kata's grave with runes engraved in the covering stone. 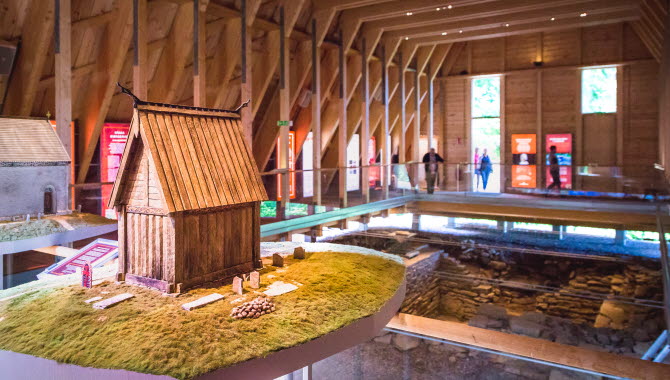 Café with a historic view

When you need some refreshments, go to the nearby café and have coffee and delicious cakes with a view overlooking the monastery park. Don’t miss the Västergötland Museum in Skara and see the exhibition called “Kata and Kättil – the finds in Varnhem”.