A church with historic roots and an Iron Age burial mound

In the countryside surrounding Skövde, Skaraborg Culture Route winds its way past some of our most interesting cultural and historic landmarks. These include the village of Flistad and Flistad Church with King Rane’s Mound.

A church with historic roots

Flistad is one of the most densely populated villages in the area. This is a typical plains village, situated on a small ridge. The village church dates back to the 12th or early 13th century. It was rebuilt following a fire in 1706, but the oldest remaining parts date back to the original structure. The church has an audioguide detailing more of its fascinating history.

King Rane’s Mound, one of the largest burial mounds in Skaraborg, can be found in the churchyard right next to the church. It is thought to date back to the Younger Iron Age, around 400 BC to 1050 AD. King Rane’s Mound is a pre-Christian tumulus, and Rane was one of many names for the god Odin.

Is a king actually buried there?

A king called Rane is said to be buried in the mound. However, this is far from certain as no detailed investigation has ever been carried out – other than a school teacher and his class who carried out their own excavation in the 1930s, which was soon abandoned. A Viking runestone has been found near the grave. This may have stood on the mound, but to date no evidence to support this theory has been found. The burial mound may also be considerably older. There is a replica of the runes

tone next to King Rane’s Mound.

Discover more sights along Skaraborg Culture Route by downloading the app from Google Play or the AppStore. 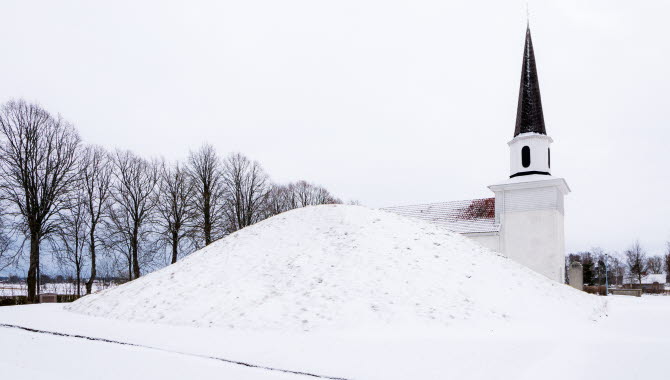