The coastal village of Mollösund lies on the south-west tip of Orust. What used to be one of the most important Bohuslän fishing centres is now a popular resort for everyone looking to escape from the stress of everyday life, enjoy great seafood and be overwhelmed by fantastic seascapes.

Whether you come to Mollösund from the sea or by land, you’ll find a very friendly place with a fascinating history. The village is protected from strong winds by Mollön and is located on the outer coast of Orust in central Bohuslän, 80 minutes by car from Gothenburg. The guest harbour has over one hundred moorings and along the quayside there are cafés, restaurants and piers with outdoor refreshments. Fish and seafood are always on the menus, to be enjoyed at their best with views of the boat life in the bustling fairway by Strömsund. There are a number of accommodation options in Mollösund, each with their different charms. If you wish to discover the west Swedish coast without crowds of summer guests, come to Mollösund from October to March. The fishing village is once again calm, the winter backdrop is in place and the air is as clear as the night sky is dark.

The lighthouse, the old lady, the church and the windmill

Mollösund is characterised by four landmarks – the lighthouse, the old lady, the church and the windmill – which have all four become popular tourist attractions. Proudly situated on the hill Galleberg promontory in the north-west of the village, the lighthouse welcomes sailors and other seafarers.

The old lady also has a clear link to the forces of the sea. This statue, sculpted in wood, represents a fisher-woman who is looking out over the vast sea in the hope of seeing her loved one returning. The location of the statue is by the Klockeberget belvedere, where there is also a memorial to those who have died at sea. Below the viewpoint is Mollösund church, which was completed in 1866 and replaced the wooden church that was previously at the old cemetery. The fourth land mark is the windmill, dating from the 18th century. The windmill was in use until 1929 and these days are celebrated with great pomp and ceremony at the annual Windmill Day event.

Once the largest fishing centre in Bohuslän

Herring fishing started in Mollösund in the 16th century and within the following hundred years the village grew into Bohuslän’s largest fishing centre. Then came a period of harsh winters, poor fish stocks and poverty. Not until the end of the 19th century did the herring fishing recover, and at the beginning of the twentieth century a road was built out to Mollösund. 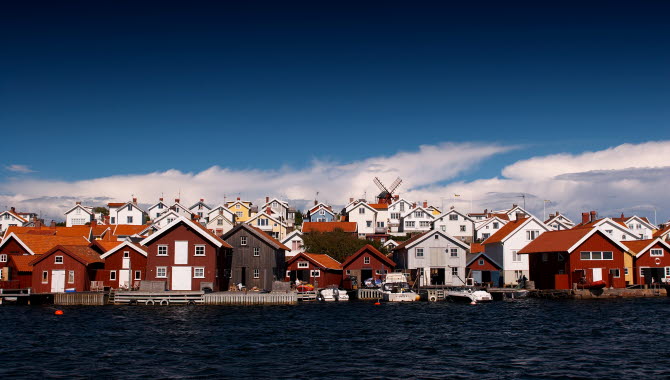 The present harbour and guest harbour were built during the Second World War. Fishing declined more and more in the 1970s and these days the village is mainly known as a summer idyll, even though there are remains from the heydays of the herring era here and there.