Naturally, the cranes are closely associated with spring in our region, as this is when they arrive in their thousands to the area around the Trandansen Information Centre, where they remain from mid-March until the end of April. The cranes spend the summer months in the secluded forests and swamps of northern Sweden, where they nest and breed. Once the babies are able to fly, the birds head south again, and by mid-August or September they are back at Lake Hornborgasjön.

Cranes in the spring

The first cranes usually arrive at Lake Hornborgasjön as early as mid-March, although the greatest numbers are usually see in early April. The birds are counted each evening, when they fly to their sleeping places. The record is from Tuesday the 3rd April 2019, when no less than 27,300 cranes gathered in the area below the Trandansen Information Centre, at the southern tip of the lake. This is a great place for crane watching. The Information Centre is located in Bjurum, right next to Road 184 between Falköping and Skara. The Centre has car parks and viewing spots. 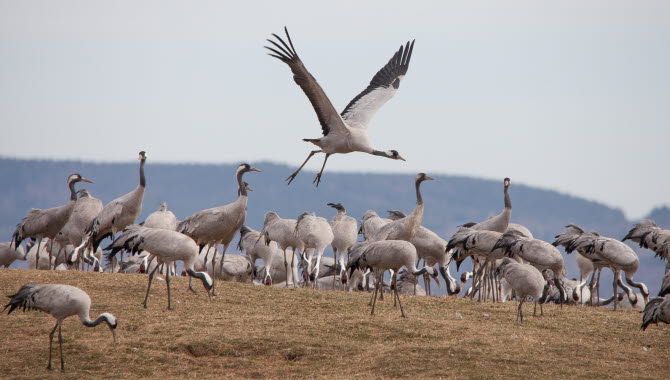 Cranes in the autumn

The autumn cranes behave very differently from the ones that arrive in the spring. They are more withdrawn and less patient, and tend to stay at a significant distance from humans. One reason may be parenthood, which requires them to be more cautious and suspicious, as many of the pairs have an almost adult baby in tow.

During the autumn you can see cranes at dusk in Trandansen , Bjurum which is located at the southern part of the lake. You can also see them in the fields north of the lake or on the fertile agricultural land to the west. 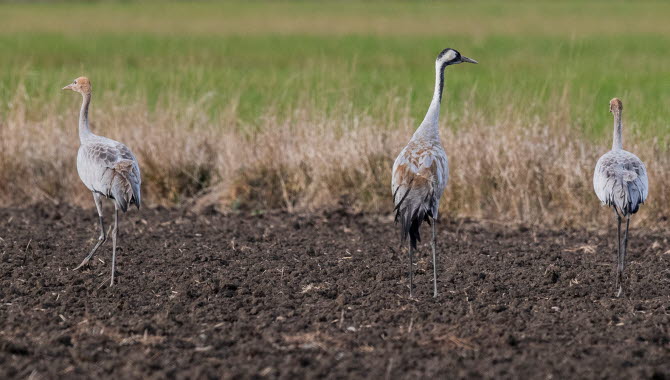 For further information about the cranes and birdlife by Lake Hornborgasjön, see www.hornborga.com

Information what you can see and do in the area: www.visithornborgasjon.se