The first cranes arrive at lake Hornborgasjön as early as mid-March, and a few weeks later the place, which is between Falköping, Skara and Skövde in West Sweden, is filled with thousands of dancing cranes. Do you know why these remarkable birds gather here?

The frost is starting to melt in the soil and the light arrives earlier and earlier in the morning. The roadsides are filled with lovely yellow coltsfoot and people start to dust off their bicycles after the winter. There are many signs of the spring’s arrival, but one of the most conspicuous signals here in West Sweden is the arrival of the cranes at Hornborgasjön. 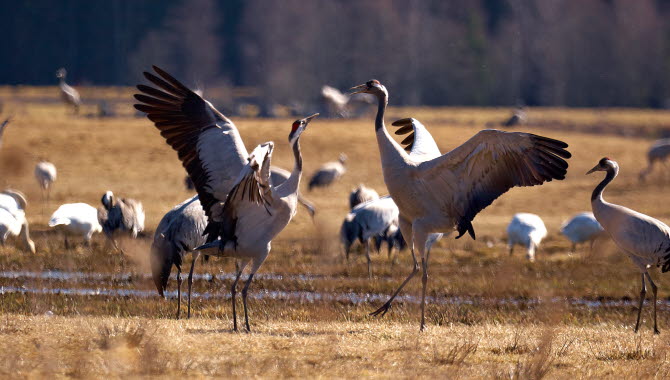 This is one of Europe's most important lakes for birds, and the best place to see these proud cranes and their dance is at the southernmost part of the lake. There are viewpoints, an information building and during the crane season ornithologists are there every day to tell you all about these birds. Before you arrive there – in fact, right here and now – you can get to know more about Västergötland’s emblematic animal, the crane (which in Latin has the rather odd name of Grus grus).

Cranes have different personalities! Some are keen to get the very best nesting place and arrive early at Hornborgasjön to claim their turf - rather like bagging a sun lounger on a crowded beach with a towel. Others are a little more laid back about the rush.