Calm atmosphere among the rocks and boat-houses

Hälleviksstrand is beautifully located on the island of Orust in the Bohuslän archipelago. Enjoy dips in the sea, the busy boat life in the guest harbour, coffee and cakes and taking a relaxing walk among the boat-houses, rocks and coves.

The place where peace starts

On the west coast of Orust, midway between the villages of Ellös and Mollösund, is where you’ll find friendly Hälleviksstrand. The country road that leads here winds through agricultural landscapes, through forests and ancient monuments. The first thing you see as you approach the place is the magnificent wooden church of Hälleviksstrand, built in the Norwegian style and painted with the traditional Falu red paint. The sea constantly reminds you of its presence near the village, with salt-laden winds and spectacular views. 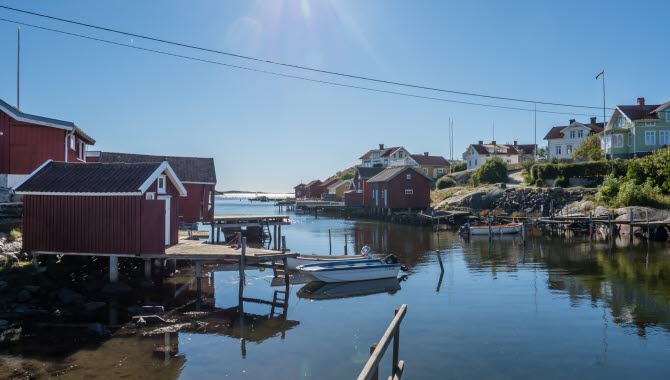 The closely spaced wooden houses and the red boat-houses bear witness to its history as a fishing community. The passenger ferry to Käringön used to leave from here, and stressed motorists trying to catch the ferry parked all over the place in the village. The ferry services have since moved to Tuvesvik and Hälleviksstrand has regained its calm.

The archipelago outside Hälleviksstrand is perfect for kayaking, with its narrow coves and shallow sound. You can rent kayaks nearby, at Stockens Camping for example. Gliding silently on the surface of the water, quietly approaching seals and birds, you are at one with nature. There is a swimming area just south of the town centre with diving towers, a trampoline and a beach. You can also play tennis and boules in Hälleviksstrand. 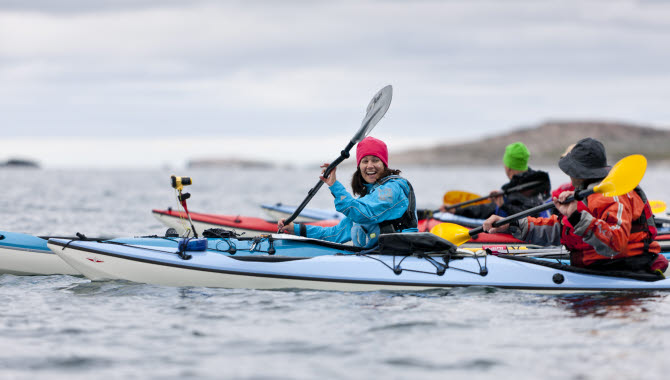 The first time Hälleviksstrand was mentioned in writing was in 1617, then later during the 18th century herring period the area expanded with salting houses that tempted farmers away from the inland of Orust. As well as the major fishing industry, the cargo industry and the export of oats also flourished. At the end of the nineteenth century seaside resorts were developed along the whole coast outside Gothenburg, with heated indoor pools and guest houses for wealthy summer guests. In 1905, there was a major fire in Hälleviksstrand that devastated large parts of the town, but the local population reconstructed the buildings and at the same time Hälleviksstrand shipyard, canning factories and stonemasons started up. The glory days of the town can still be seen in the beautiful glass verandas, bay windows and gingerbread woodwork.