Askeberga Stone Ship is Sweden’s second largest ship tumulus. This mysterious monument is located near Tidan in Skövde. It is unlike anything else in the country, and no one has yet been able to come up with a good explanation of its purpose.

In Askeberga, near Tidan, you can visit one of Sweden’s great unsolved mysteries. This impressive stone monument consists of 24 large stones, which are approximately two metres tall and arranged in an oval 55 metres long and 18 metres wide. It is sometimes called a stone ship and sometimes a stone circle, but neither of these names are entirely accurate. The characteristic stern stones of a true stone ship are missing, and stone circles are much smaller. Historian Dick Harrisson has commented on Askeberga, describing the stone setting as one of Sweden’s most fascinating riddles.

The nearby mediaeval estate of Vad and several mediaeval churches tell us that this was once a wealthy area. It is unclear when or why the stones were arranged here, but we can assume that Askeberga was an important meeting place for the local people. Was it used as a market or a parliament? Or by a religious cult? This is a riddle that remains unsolved.

Groups can book a guided tour by making arrangements with the voluntary organisation Askebergagruppen. Talks can also be booked with archaeologists who have taken part in the excavations. School classes can book a lesson about Iron Age Västergötland. 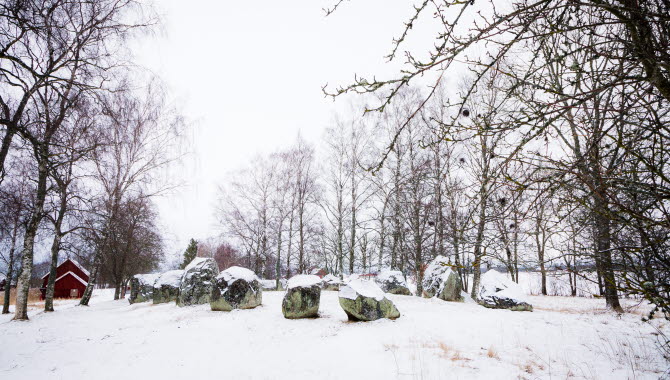