One of Sweden's westernmost group of islands

Väderöarna (“The Weather Islands”) are a group of islands in the west archipelago in Sweden off Fjällbacka, in Bohuslän. It is a nature reserve where you can hike, swim, watch seals and sea-birds and enjoy really fresh seafood.

You can get to Väderöarna either in your own boat or with the Fjällbacka ferries, which are run by the Väderöarna inn. The old pilot’s harbour still receives the island's guests and there are several beautiful places where you can moor your own boat.

Ornithologists, anglers, divers and other nature-lovers will find a wealth of exciting experiences on this relatively small island - as well as sunbathing and swimming. Walk among the rocks and cliffs, or hike along the nature trail that takes you to the island's historic places, such as the Compass Rose rock carving and the pilot’s lookout.

The inn and seafood safaris

The inn, Väderöarnas Värdshus, opened in 2005 and offers rooms, a restaurant and pier café all year round.

The menu is seasonal and varies with the conditions of the sea, the seasons and the weather. It is a great place to hold weddings, christenings, family gatherings and business events. You can go kayaking, join a crayfish or lobster safari or go mackerel fishing. Warm yourself on your return in the wood-burning granite sauna or one of the hot tubs.

Väderöarna have one of Sweden's warmest but also windiest climates, which clearly influences the flora and fauna on the islands. In the summer you can book a boat trip to one of Bohuslän's largest seal colonies here. There is also a rich diversity of bird species, with good chances of spotting skua, shags andblack guillemots. Fascinating diving adventures await you in one of Sweden's two living coral reefs off the islands. Väderöarna are considered to be one of the country's most valuable marine areas and were classified as a nature reserve in 2012. 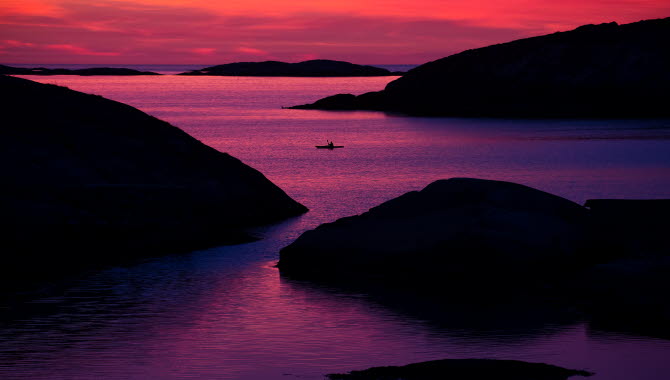 The archipelago consists of 365 small islets and islands, and the pilot’s lookout is part of the Swedish Meteorological and Hydrological Institute's network of weather stations for coastal observations. The largest wave recorded so far by the buoy to the south-west of Väderöarna was 13.9 metres!

Väderöarna are steeped in memories and traces from centuries of shipping. Seafarers have been forced here by strong winds since the 13th century and Väderöarna were long considered impossible to inhabit due to the harsh climate. There are many rock carvings on the main island: house marks, compass roses, dates and escutcheons. Pilot operations started in the 18th century and pilots and their families lived on the main island until 1966.