Several buildings in Ulricehamn are painted with murals. A mural is a painting that is part of a building, for example painted directly on the wall. In 2016, the municipality of Ulricehamn gave street art artist Shai Dahan the mission to paint murals on two gray concrete walls. After that, more murals have appeared in the city. 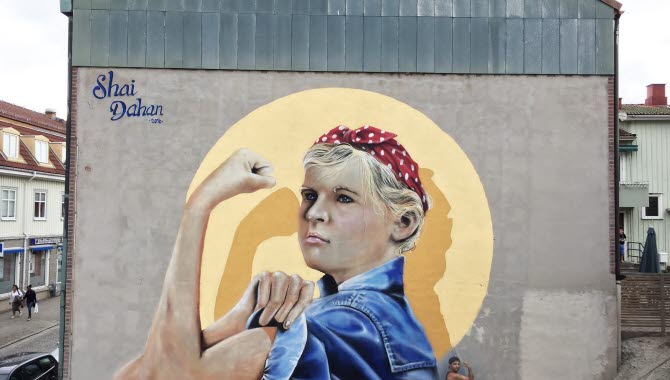 One painting is on the wall at the corner of Färgaregränd and Storgatan. The three-storey building depicts Ada Nilsson, the women's rights activist who was born in Gällstad outside of Ulricehamn in 1872. Not only did Ada fight for women's rights, but she was also one of Sweden's first female doctors. She has meant a lot in the fight towards gender equality in Sweden, and was therefore an obvious choice as a motive for the mural paintings.

Shai got the inspiration for the painting from the famous poster of ‘Rosie the Riveter’, a fictional cultural icon with the famous text "We can do it!" The poster was used as a propaganda in the United States during World War II to encourage women to work in the war industry. It has later been used repeatedly to convey feminist messages and other political agendas. Especially in the 1980s, the poster was used to create new images for political campaigns, advertisements and parodies.

That it was just Shai Dahan, who was commissioned to paint Ulricehamn’s walls is due to the fact that he has been active in the neighboring municipality of Borås for a number of years, where he created a lot of public art. Shai was born in Israel, but raised in the United States, where he began his career with illegal graffiti. Eventually, his art career became more legitimate, and he was very involved in the skateboard and surfing culture in Los Angeles. In 2007, Shai moved to New York where he participated in various street art projects. He also began to exhibit his art in galleries in Los Angeles, Boston and Philadelphia. Love eventually took him to Sweden and Borås, where he started the ‘No Limit street Art Festival’ in 2014. The festival consists of both international street artists as well as Swedish artists.

Another one of Shai Dahan's murals, that can be seen in Gällstad outside of Ulricehamn. 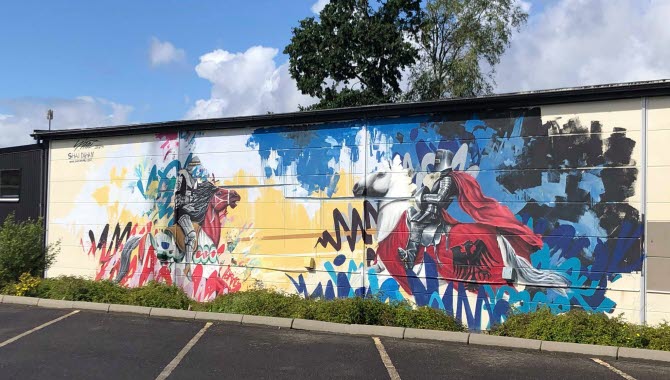 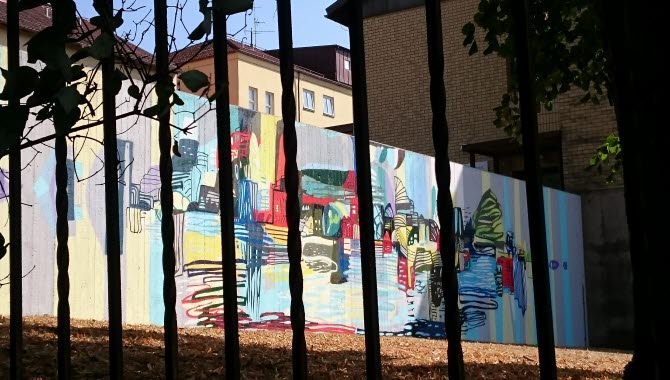 This mural painting is painted with concrete paint as a base and spray paint on top. The composition is inspired by water reflections and reflections of a city by the beach. It is built with three colors, a light-blue for the sky and water, a light yellow with house colors in mind and a neutral grey as a base.

Some small symbolic forms and figures such as zigzag movements as the ski slopes and certain architectural elements from Ulricehamn are included. During the painting process, the artist has strived to find a balance between color and shape, and to mantain the feeling of the horizon line/reflection, but still break up the background and the basic composition to give the painting energy and movement without losing the basic idea.

The artist has customized the painting for it to work well in the environment with its choice of color. the lines in the fence are repeated in the motif. Her idea was also that the painting should be able to be seen in parts, and not only in its entirety.

Marie Dahlstrand named the mural "Double-sided" because it has a form of mirroring image in the composition.

Marie Dahlstrand was born in Lidköping in 1973, but is now based in Gothenburg. She is a trained artist at Valand in Gothenburg, and mainly works with painting and collage. Marie has had a long series of solo exhibitions and is represented in several different municipalities and counties.

Several pedestrian tunnels inside Ulricehamn have also been enlivened with colorful paintings.

Five summers in a row, young adults from the city have painted murals on pedestrian tunnels under Tre Rosors väg. During less than a week, the kids gathered in a painting camp where, with the help of artists, they got to paint the tunnels according to a chosen theme. 2016 Adam Algutsson, 2017 and 2018 Camilla Boström, 2019 Mikael Rickman, 2020 Street corner.

The first painted tunnel with motifs containing pop cultural figures such as "Pokémon" can be found just after the roundabout near Ulricehamn's indoor swimming pools. The second tunnel with a bird-themed motif can be found in the transition that leads to the Åsundavyn preschool. The third tunnel with an underwater theme connects Aspelundsdreven with Pionanvägen. The fourth painting has a floral theme and is located on the the pedestrian and bicycle tunnel on Tre Rosors väg (the first tunnel up from road 157).

The fifth tunnel has a 16th century theme with a focus on the Battle by Åsunden's ice. the tunnel is located near Skottek by lake Åsunden. It was organized by two teachers from street corner, who helped as 10 children painted for five days in a row. The children were about the ages of 10-12 years old. 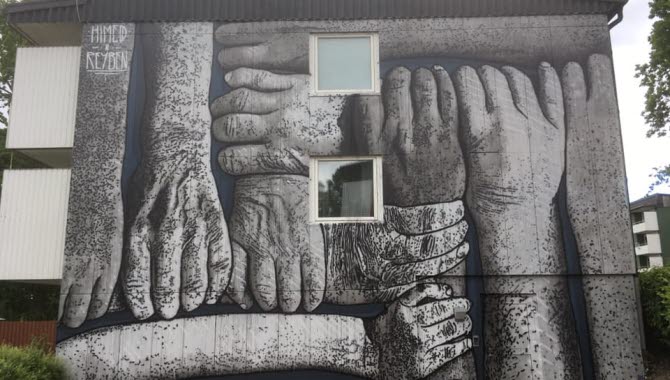 These were created in June 2019. The artists Himed and Reyben from Mexico stayed for 20 days in the residential area Karlslätt, where they got to know the residents and created art together. The artists portrayed the residents' hands on a house facade and a garage. The painting in the garage was created together with the residents.