Stage 27 of the Bohusleden Trail takes you from Högstad to Strömstad, a 15 kilometre stretch. It’s a varied walk, with a bit of everything, including some road walking and winding forest paths, finishing in the centre of Strömstad, with a view of the boats and islands.

The 27th stage of the Bohusleden Trail offers anyone interested in history a real smörgårsbord. The stage starts in Högstad, but you are soon surrounded by lovely hilly woodland, where you’ll pass a great many ancient remains. A short detour will take you to a Bronze Age grave site, just before Bovall. The trail then continues along country roads before you turn off again. You can follow the marked detour here (around 150 metres) to Rogstads Hillerns shelter, where you’ll get a stunning view of Strömstad and the Kosterhavet Sea to the west, from the top. Immediately after the detour you’ll pass an impressive giant’s cauldron.

At Jonsbo you can also make an approximately 10 minute detour to visit an interesting historic manor house, Blomsholms Säteri. It was built as far back as the 17th century by a German nobleman, Anders Blume. One of the biggest stone ship grave settings in Sweden, believed to be from early Iron Age, is found here.  The stone ship is just over 40 metres long and consists of 49 raised stones in the elongated oval shape of a ship. There’s also an ancient field system and an early Iron Age burial site with a large stone circle. Nearby is the Chatarina Skog, an enchanting, somewhat overgrown wood. In the 1700s a French inspired nature park was laid here by the lady of the manor, Chatarina Blume. 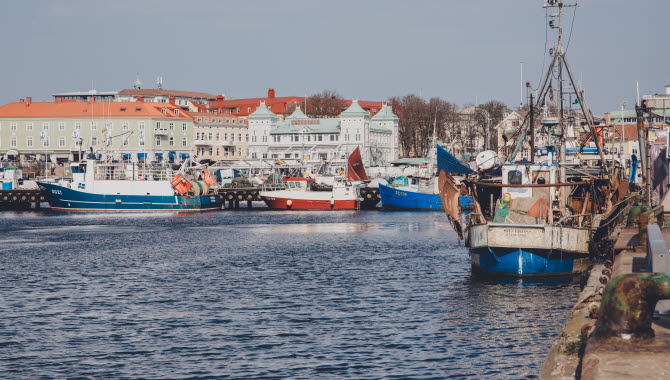 The Bohusleden Trail takes you on to Grönehög, an Iron Age burial ground, which contains Bohuslän’s biggest barrow, amongst other things. Not far from Grönehög the trail crosses the historic transport route Galärleden, which today is used as a combined walking and canoeing trail. The route was laid in 1718 when Swedish soldiers hauled twelve large galleys from Strömstad to Idefjorden. The ships were dragged over land and through bogs when they couldn’t be rowed across water, with the aim of being able to attack Norway from an unexpected direction.

Towards the sea in Strömstad

After continuing along winding paths you will finally reach the charming coastal town of Strömstad, where you’ll be rewarded by a lovely view of the Kosterhavet Sea from this busy seaside and shopping town. The path ends here in the middle of the town, by the harbour. It is in fact the only time the Bohusleden Trail reaches the sea. Take the opportunity to visit the Kosterhavet National Park, and go island hopping to the Koster Islands, where there are lots of pretty walking trails.  In Strömstad there’s a large range of lovely accommodation, good food and events to enjoy.

The stage is 15 kilometres long.

The trail is waymarked with orange on trees and posts, which makes it easy to guide yourself whichever direction you are walking in, or however many sections you walk. At the start of each stage there is a board with information about distances, symbols and facts about the right of public access.

The trail is classified as moderate. The stage is very varied, and is mostly on forest paths through beautiful, wild landscapes. You’ll walk a few kilometres along country roads and immediately after the trail becomes very hilly, as you climb over a high hill. The last part of the stage is easy walking in forests, before arriving in the town of Strömstad.

The stage starts in Högstad, a 10 to 20 minute bus ride from Strömstad. Högstad bus stop is about 500 metres from the start of the stage. There’s also a small car park just after the country road a little bit past the start.

Stage 27 is in the municipality of Strömstad in Northern Bohuslän. It’s an easy drive of less than two hours to get to Strömstad from Gothenburg or Oslo. By train from Gothenburg it’s approximately two and a half hours.

A digital map of the trail can be found on Google Maps. You’ll also find more information and maps on the Bohusleden Trail’s website.