Light art festivals have been enjoyed by millions of spectators in the world’s largest cities, but few people have experienced a salt-splashed island illuminated by light art, including the rocks, boathouses, the sea around it and the starry sky above. Witness a unique, magical tribute to light in Smögen between 12-15 September 2019.

As the summer light slowly fades in the Nordic countries, the international Island of Light festival will be arranged on one of the most famous locations on Sweden's west coast, Smögen in Bohuslän. Over four evenings we will celebrate what we long for over the winter…light!

A festival unlike anything else

So what is so special about the Island of Light, or the Smögen Light Art Festival as it is also called? The remarkable thing about this place is the fascinating contrast between the international light art and the local backdrop of Smögen town and the rocky landscape, plus the fact that the festival can be enjoyed from both land and sea. The famous Smögen bridge is one of the main venues of the festival.

“New York, Berlin, Sydney and other global cities usually put on this kind of festival. It’s the first time that it will take place in harmony with nature in a setting like this,” says the festival's project manager, Dulce Ahlberg.

Not even the world-famous artists who bring their works to the festival have seen anything quite like it, which is one of the reasons why they are coming. They want to see how their creations of light will bring alive the natural beauty and tranquillity of Scandinavia, and they want all the festival-goers to see it too. It will be a radical change from illuminating skyscrapers and motorways.

Amazingly 30 000 people gathered to take part in Islanf of light when it first started in 2018. This was the first festival in its form on this small island, and the first ever to take place far away from the well-known metropolises of the world.

Now, there is work in progress for the next one in September 12–15 2019. Several major international light artists will be attending, among them Kari Kola from Finland, Yvette Mattern from the US and Cooper & Gorfer from Austria/US. Their sparkling, winding, playful lights will be interspersed with four sound artworks, as well as installations by Swedish artists. 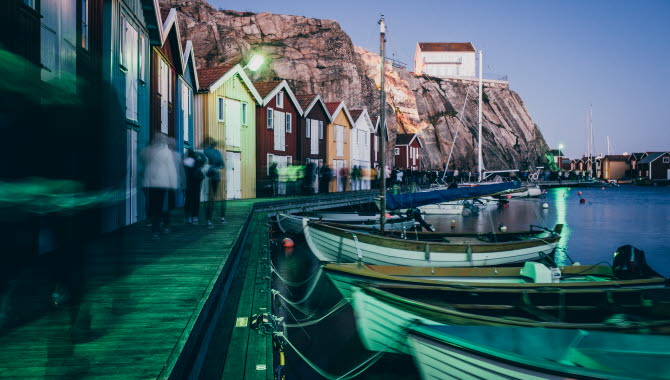 Practical information about the festival

The festival Island of Light can be experienced both from land and from the sea surrounding Smögen. There are bookable boat tours, guided in English and Swedish. The route will start at Smögen harbour area, pass under the bridge and go to the Sandö site. If you wish to see the artworks from land you can do it on foot.

Island of Light is free of charge, however a crowdfunding is available for those who wish to support the festival.

It is appreciated if visitors park their cars outside of Smögen and join the Island of Light buses from parking places in Kungshamn and Väjern. You can also go with collective communication (Västtrafik) buses 860/862 from Göteborg or Trollhättan. Västtrafik extend their bus routes these days. There is an opportunity to take a boat to Nya hamnen at Smögen. From there you can walk to the two festival sites Bryggan and Sandö. This boat trip is just a transfer.

The small island of Smögen is known as the Swedish capital of seafood,with several popular restaurants. During the festival you'll also be able to enjoy delightful street food from across the world.

Looking for a place to stay the night? The Island of Smögen offers the opportunity to enjoy a stay in a natural environment, surrounded by the beauty of the sea and the picturesque narrow streets of the old fishermen village.

Involvement of the local municipalities

Involvement of the local municipalities, Smögen and Sotenäs, has been given priority during the festival. During the four late summer evenings people of all ages, residents and visitors alike, will take part in a folk festival of light, art and the very special setting on Smögen – an exceptionally clean, quiet and peaceful venue. Even the municipalities’ young inhabitants will be involved. Pupils from Sotenäs schools will be there with their own light art works.

“The Festival aims to create something beautiful and fascinating for everyone who lives on or visits Smögen,” says Dulce Ahlberg, “but also to underline the importance of caring for the beauty that nature itself has created – just think about the horrifying problem of all of the plastic in the sea. That’s an issue we’re really going to highlight!”

How does it compare with Lights in Alingsås?

The celebration of light is not a new phenomenon in West Sweden, as any enthusiast of light events will be aware of. The annual event Lights in Alingsås has brightened up the small town in the autumn darkness since the end of the 1990s, but the difference between Alingsås and Island of Light is what is done with the light.

“Certainly, Lights in Alingsås is really beautiful,” says Dulce Ahlberg, “but it is lighting, not light art.”.

Accommodations and restaurants in Smögen

Other cultural experiences in West Sweden