In August, the evenings feel velvety smooth and get increasingly darker. The moon resembles a huge orange where it hangs above the treetops. It feels both beautiful and sad to leave the summer behind. But before the autumn takes a firm grip of the people of Scandinavia, it’s time for a Crayfish Party.

The crayfish should preferably be eaten outdoors, in the garden. If you’re really lucky, these red delicacies will be enjoyed on a lovely veranda, with ornate woodwork and windows facing the water, close to nature. The feeling of almost sitting outdoors is magical.

Irrespective of where you are, you can create the right atmosphere. Lanterns, paper moons, or coloured light bulbs light up the dark autumn evening. By adding crayfish knives and plates, napkins and serving dishes decorated with crayfish, you soon get in the mood for a Crayfish Party. Paper hats and bibs decorated with crayfish motifs significantly enhance the ambience. If you are living outside Sweden, and feel like holding a Swedish style party, Swedish crayfish and everything else you need is available from IKEA. 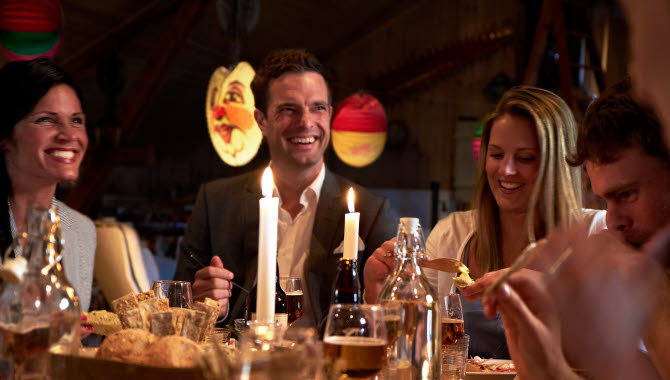 However, it is possible to create an attractive setting with much simpler means. Cover the table with a not too patterned, preferably coarse tablecloth. Decorate with branches of rowan tree and candles. Then set the table with large plates, beer and schnapps glasses. You'll need plenty of napkins, so place two by each setting. The only cutlery you need is crayfish knives, preferably with a small hole in the blade for breaking off the tips of the claws.

Now the party can begin. In times gone by, guests were served a buffet meal of warm and filling dishes to start. This could include omelettes, meatballs and sausages. Nowadays, we often start with creamed chanterelles on toast as there are plenty of mushrooms in the forests during the crayfish season. Or you can serve a much more modern alternative; a delicious Västerbotten Cheese Pie as a starter. After this, it's time for the crayfish. Arranged on large serving dishes, decorated with fresh heads of dill, they are the focus point of the evening. Traditional accompaniments include toast, tasty crackers, and flavoursome cheeses, like Västerbotten and cumin cheese.

The beer and schnapps must not be forgotten. The schnapps should be enjoyed to the sound of traditional songs. Some prefer to drink it 'bottoms up', but many would rather drink slowly, a mouthful at a time, to the different songs and toasts. 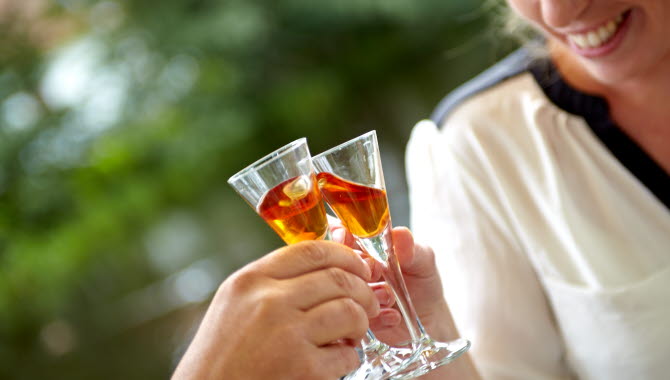 Fruit is often served for dessert. The fruit is smooth and fresh after de salty, strongly flavoured crayfish. Netted melon used to be a popular choice, probably because you can grow them yourself in cold frames. Redcurrants were also common, along with other seasonal produce. Slightly more modern, and very nice, is to make a fruit salad with berries.

According to tradition, crayfish should be eaten in August, something which many Swedes still maintain, even though they are now available to buy all year round. This tradition is based on the fact that there was a risk of depleting the stock. A start date for catching crayfish was therefore set in law, as the first Wednesday in August. This date was probably chosen because crayfish shed their shells 2-3 times during the summer, as they grow in size. Wivianne Rydh, who is a crayfish farmer, tells us that the crayfish are very vulnerable when they discard their old shell. Only a thin membrane protects the crayfish during the 14 days it takes for a new shell to grow. During this period, the crayfish like to hide under stones and rotten tree trunks on the seabed and by the shore.

Catching crayfish is great fun. People used to spend the nights in August in a rowing boat on a lake, emptying their crayfish pots. Apart from pots baited with small fish, nets were also placed near the shores. We children used to light a campfire and tell each other ghost stories during the evening and night. Afterwards, it was a bit scary to walk into the dark forest to empty the nets with only a torch for company. 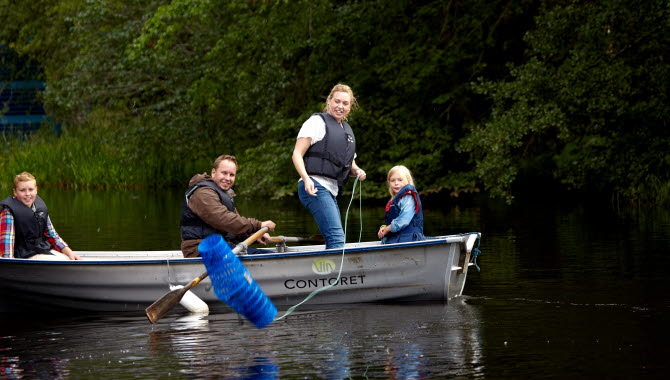 Freshwater crayfish are nocturnal and caught at night, by the light of a full moon in the early hours of the morning. Nowadays, the native freshwater crayfish is extinct in many parts of Sweden, because of crayfish plague. The more robust North American signal crayfish has therefore been introduced in many lakes and waterways. With a boat and cages, it is easy to catch this crayfish early in the morning. A lot less romantic, and much more rational.

On the West Coast of Sweden, people prefer langoustines, locally known as Ocean Crayfish. With their pale pink shells and long, narrow bodies they are quite different from the red freshwater crayfish. Langoustines should be boiled in generously salted water. Most locals feel that it is completely unnecessary to add dill, beer and other spices to the water. Langoustines are served with warm baguettes and aioli.

A few things you didn't know about crayfish: