Discover and explore the Gothenburg and Bohuslän archipelagos by bicycle and imbibe the rich variety of natural settings, pretty fishing villages and charming small towns. Archipelago cycling combines a number of scenic and safe cycling routes and boat transfers that guide you from the Gothenburg archipelago in the south, to the town of Strömstad and the Koster islands in the north.

The Gothenburg southern and northern archipelagos are made for cycling with separate roads and cycling paths and some car-free islands, making them perfect for family outings. Most of the roads and paths are paved and there are plenty of bridges and ferries between the islands. You can hire a bicycle locally and public transport is the best way of getting around when you’re not on a bike. 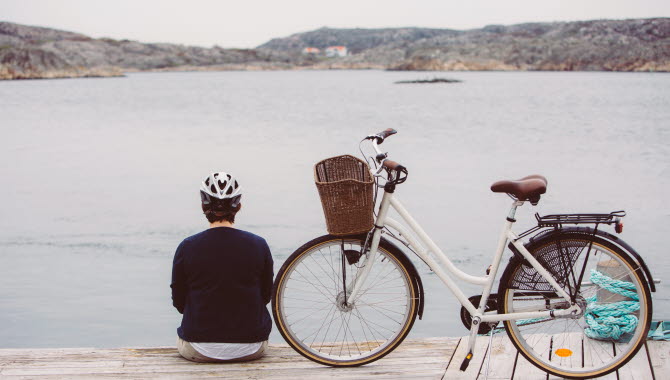 Tjörn is the perfect island for bicycle rides with scenic cycling paths through its gorgeous countryside. Have a dip in the sea, enjoy local delicacies and pop into a local art gallery for some art. Most of the cycling paths are paved.

On the island of Skaftö there are cycling paths from Östersidan via the villages of Fiskebäckskil and Stockevik to Grundsund. Most of the cycling paths are paved, although some are gravel. You can take the ferry Carl Wilhelmsson from Skaftö to the town of Lysekil on the mainland.

You will find many good road cycling opportunities in Bohuslän, for example on the island of Orust, Sweden’s third largest island. The cycling paths here are paved and take you through varied natural settings overlooking nearby islands, as well as cliffs in the west, to farmland and inland lakes on the east of the island. There is fabulous road cycling in the north of the island in the area around Södra and Norra Bullaresjöarna going south-west towards Tanumshede and Vitlycke via Sannäs. Look out for the fantastic bronze-age rock carvings and paintings at the Vitlycke Museum in the area. Otherwise just take in the natural scenery and wildlife.

If you are in the town of Strömstad you should take the boat out to the Koster islands. On South Koster island there is a small  network of bicycle-friendly paths that are mostly car-free and run alongside walking paths.

Here is a schedule of boat and ferry timetables that you can use on your cycling trip.

This is your guide to the safest, most beautiful and exciting cycling routes along the coast. In it you will find some suggested routes of varying length and character from Gothenburg to Strömstad. Some stretches can be combined with boat and ferry routes.

The terrain is paved and gravel cycling paths. The routes also combine road and cycling paths and contain suggested routes, sightseeing spots, as well as interesting places and information. Road characteristics are shown clearly on the map: separated cycling paths are shown by a thick red line, shared traffic/cycling path by a dashed line and busier traffic/bike paths by a dotted line.

The map, available in printed format, covers all of Bohuslän. The map can be purchased at Tourist Information Centres and bike hire outlets.