This stage of the Kuststigen between Väjern and Tullboden, which is also the stage 6 of the Soteleden, passes some of Bohuslän’s best examples of coastal heathland. You’ll hike through forests and occasionally by the sea.

This stage of the Kuststigen and Soteleden starts in the little fishing village of Väjern, one kilometre north of Kungshamn. After a short time you’ll come to two giant’s cauldron’s, “Dyrstolen” and “Predikstolen”. Giant’s cauldrons are potholes carved by meltwater into the rocks. They were created when eddies of water swirl round a collection of stones and gravel, that eventually ‘drill’ down into the bedrock. During the ice age many huge giant’s cauldron’s were formed, and you can often see the boulders that wore down the stone at the bottom of the cauldron, or nearby as unusually smooth, egg shaped stones.

Håle Dalar, which you will pass, is a fantastic landscape, home to lots of nesting small birds. Near the ferry landing to Malmön is Bua heath, an area of natural beauty with an extensive coastal heathland and lovely beaches. The heath is on a sand deposit which makes the vegetation very susceptible to damage. Between the rocky headlands along the shore there are several swimming beaches, and from the tops you’ll get a magnificent view of the fjord and archipelago.

This stage is 13 kilometres.

This stage takes around 4-5 hours to walk.

The trail goes through varied terrain and is classed as moderate, but it can be boggy and steep in parts. At times you’ll be hiking along the coast but also through forests. 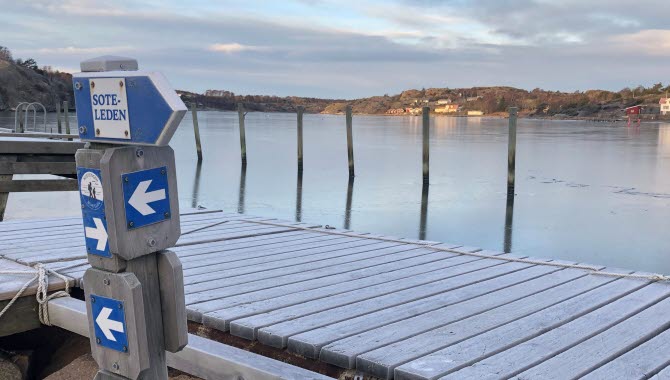 This stage starts in Väjern. There is a car park by Såtthagen football pitch. If you are travelling by bus get off at Väjern bus stop.

Väjern is a little village in the county of Sotenäs, just before Kungshamn and Smögen. It takes approximately 90 minutes to get there by car from Gothenburg, or by bus from Uddevalla (change at Halllinden). There are occasional direct buses from Gothenburg which take around 2 hours to get there.