For thousands of years people have lived in the beautiful countryside near the foot of the Billingen plateau in the West Swedish province of Västergötland. This is also the location of one of Europe’s most important bird lakes and wetlands: Lake Hornborga Nature Reserve. Every spring the lake attracts tens of thousands of visitors – both birds and humans. The crane dance – a courtship display – is the year’s main event.

In late March the first cranes return from Spain, where they spend the winter. Suddenly Lake Hornborga is transformed from a deserted winter landscape to a lively meeting place. The lake isn’t just a much-needed resting place, it’s also Sweden’s biggest venue for the dance of the cranes. In the southern part of the lake the cranes find and dance with their partners amidst throngs of other birds, before lifting off and continuing to their breeding grounds in northern Sweden. The peak is during the first week of April when around 20,000 cranes are present, but many stay until the end of the month. Every spring their dynamic dance attracts more than 150,000 visitors from around the world. 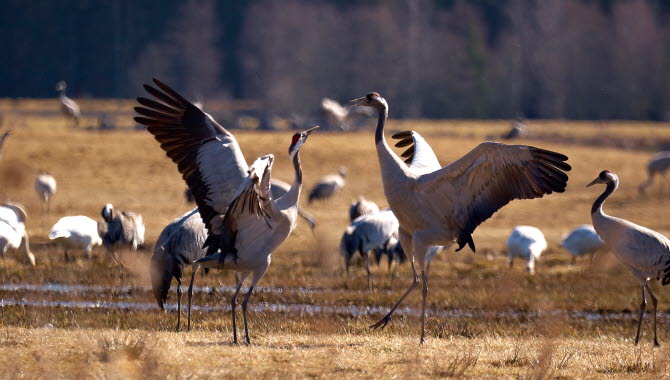 But of course Sweden’s foremost bird lake offers more than just magnificent cranes. Other species that make an appearance include swans, grebes, geese, ducks and coots, that use the lake for resting or breeding. In spring and autumn, or other times of year, you can often spot various species of birds of prey around the lake. Ospreys and western marsh harriers are commonly seen, and if you’re lucky you can watch the huge golden eagle and white-tailed eagle sailing over the countryside. In winter you can take part in special eagle weekends, when you can see the birds of prey that winter by the lake. Or if you don’t just want to go birdwatching on your own, a number of nature-related activities are on offer throughout the year.

Centuries of hard work by the local population has made the lake what it is today. In the countryside you can see evidence of this – in the biologically diverse meadows, the beautiful stone walls and the cultivated trees. Much of the lakeside meadows are kept in trim by Väne cattle – a local breed – that peacefully graze there. 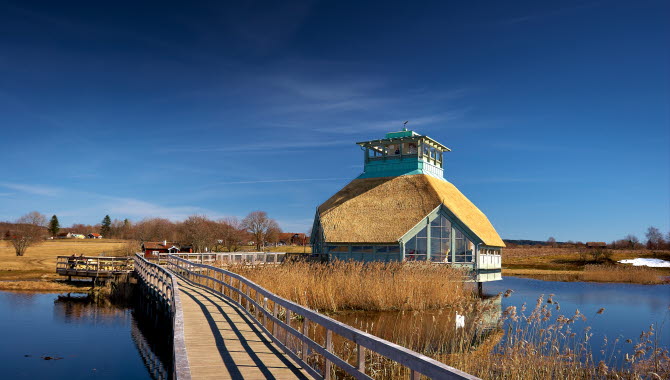 Floating on posts out in the eastern part of the lake is the restored information centre, Naturum. From March to September you can see the new exhibit on the lake’s history, learn more about the region’s diverse flora and fauna, buy a memento in the gift shop or take the lift to the viewing tower, before heading out to explore the countryside on your own. If you take the boardwalk out to Fågeludden you pass two hides where, if you’re lucky, you can see birds at close range. The Naturum is the starting point for several hiking trails that lead you out into the beautiful surroundings.

Whether you’re an ornithologist, birdwatcher or simply someone who enjoys the natural world, you’ll love your visit to Lake Hornborga.