This is why West Sweden is so great for walkers

Hiking in Sweden’s western regions is a nature experience like no other. You get the best of the wonderful coastal scenery, magical forests, endless lakes and historic landscapes rich in culture. Combine your walk with charming accommodation and food from the area.

The Swedish countryside is quite unique. Nowhere else in the world will you find such a variation of terrain combined with accessibility, making it easy to get out into natural environments. And there are tons of places to explore. Just 3% of Sweden’s area is currently inhabited, the rest consists of forests, lakes, arable land, open bogs and mountains. You won’t find overcrowding a problem here either. Depending on where you decide to hike sometimes you can go a whole day without seeing a single person. But that’s determined of course by what type of path you choose. 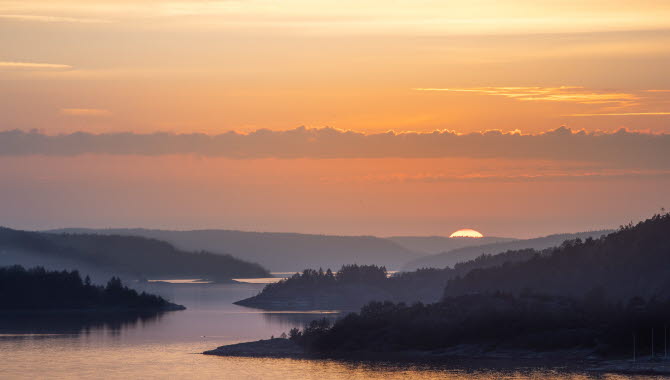 The freedom to roam (or allemansrätten as it’s called in Swedish) means that everyone who wants to can walk, paddle, cycle, pick mushrooms and berries, camp and make a campfire more or less wherever they want that isn’t private land. Read more about the freedom to roam below.

The region consists of three areas – Bohuslän, Dalsland and Västergötland – and the experience can be very different according to which part you decide to hike. Bohuslän is made up of no less than 8000 islands dotted along the lengthy coastline which stretches from Gothenburg up to the Norwegian border in the north. The well loved archipelago is perhaps best known for its tasty shellfish, swim friendly rocks and picturesque fishing villages. Dalsland on the other hand is relatively unknown, even for Swedes, which has meant that the wilderness has been left pretty untouched here. It’s also a region with one of the highest concentrations of lakes in Sweden. Västergötland is the largest area in West Sweden, dotted with forests, open cultural landscapes and medieval churches and castles. You’ll often see cows and sheep grazing in the dry stone wall enclosed fields. 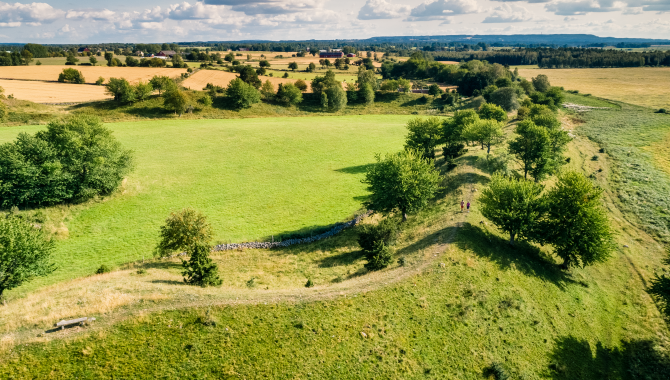 There are four national parks in West Sweden, and countless nature reserves, which many walking trails pass through. Keep on reading to get tips on the best hiking trails in each respective part of West Sweden.

One of the most dramatic hiking trails is the Kuststigen – it’s a bit like Sweden’s answer to the Italian “cinque terre”. There’s lots to experience along the way, and the contrasts are marked, with everything from deciduous forests and ancient rock carvings to bridges, boathouses and incredible views out to sea. The path snakes along the west coast all the way up to Oslo in Norway. It’s made up of many stages, some of which are out on islands. Among the most spectacular are the ones found on Dyrön, Bohus-Malmön, Ramsvikslandet, Fjällbacka and the Koster islands.

Another tip for more coastal walksis to head for the hiking trails on Marstrand. The idyllic island of Marstrand is just an hour from Gothenburg. The trails there are easy to hike but the views are hard to beat. Stopping at the Skallen lighthouse to see the point where the two seas, Skagerak and Kattegatt, meet is a magical experience.

A somewhat more traditional long distance path is the 370 kilometre long Bohusleden, which is perfect for anyone wanting to overnight in a tent or shelter (even if there is more comfortable accommodation along the trail as well). The path stretches from Lindome in the south to Strömstad in the north, but takes a more inland route than the Kuststigen. The Bohusleden offers deep forests, hilly valleys and hidden lakes. If you’re looking for a real primeval forest experience we recommend the stages passing through Svartedalen. Don’t miss Älgafallet either – Bohuslän’s highest waterfall, with a 46 metre drop.

Along the Pilgrim Path in north Dalsland countless pilgrims have trekked over the years towards the endpoint, Nidaros (Trondheim) in Norway. The Dalsland section goes from Mellerud to Åmål, a stretch of around 80 kilometres. In Upperud you can stop for a break by the Dalsland Canal, eat locally produced food and during the summer months watch the canal boats go through the locks.  South of Upperud you’re largely walking through rural areas, but the path changes character here, and continues northwards as a real wilderness trail for the true nature lover. You’ll encounter incredibly beautiful wild and endless spaces, with high hills and rift valley lakes. There are great paddling and fishing opportunities in the area.

You can also walk a pilgrim trail in Västergötland, but a completely different kind of scenery awaits here. Although the 44 kilometre long Pilgrim Path between Falköping and Varnhem has a stretch going up the plateau mountain Billingen, the path is in general easy walking. Instead, the attractions here are cultural and historical, with two monastery ruins worth seeing. On the hill behind Varnhem Abbey lies Kata Gård – the ruin of one of Sweden’s oldest churches. Along the route you’ll pass one of Europe’s most important bird areas, Lake Hornborga, which every spring is the scene of thousands of dancing cranes.

A trail that has almost everything you’d want on a hike is the Hyssnaleden in the county of Mark. The scenery shifts between forests and farms, and is hilly in parts. Along the 40 kilometre trail you’ll find caves, giant’s cauldrons, a nature reserve with a beautiful beech forest and several lovely viewpoints. Kvarnen i Hyssna mill is a good place to start from!

Hiking along the Göta Canal is perhaps the best way to experience Sweden’s biggest ever building project. There’s a car free gravel track running alongside the canal, great for observing comings and goings, the locks and surroundings. It’s easy to walk from one night’s accommodation to the next and stop at cafes along the way, making it eminently suitable to hike with children.

The Kinnekulle Trail is a lovely walk that winds up over Kinnekulle, a plateau mountain nearLidköping, by Lake Vänern. Along its 45 kilometres you’ll pass rock carvings, a limestone quarry with fossil remains, waterfalls and several pretty churches and manors. Don’t miss a visit to Läckö Castle (appointed Sweden’s most beautiful castle) on the other side of the lake. The peninsula the castle is built on also has a nice round walk on it.

The Sjuhärad Trail measures a total of 140 kilometres and passes through five counties: Härryda, Bollebygd, Borås, Ulricehamn and Mullsjö. It’s part of the European Long Distance Path E1 and offers lovely scenery, several ancient field systems and old churches. The bus connections are good because the trail occasionally goes through built up areas. In Borås you’ll be met by playful street art and a proud textile history.

In 2019 perhaps one of Sweden’s most easily accessible hiking trails was opened, the Gotaleden. It starts in the centre of Gothenburg and finishes in Alingsås, 71 kilometres later. It’s easy to adapt the walk as the trail passes several commuter train and bus stations. Despite being so near to the city you’ll come across a lot of lovely scenery, such as the cliffs at Getryggen, the Säveån nature reserve and Nääs Castle. And why not make a pitstop along the way at one of the many restaurants with a sustainable ethos.

Freedom to roam makes nature accessible to all in Sweden

As you can see there’s a great variety of hiking trails in West Sweden – whether you want to explore the wilderness with a tent and portable stove, stay in the same place and go on family friendly day expeditions or walk from one choice of accommodation to the next. Just remember to respect our natural surroundings.

Freedom to roam means that everyone has access to Swedish nature, but requires you to be responsible at the same time. The ground rule is that you can walk almost anywhere unless it is private or cultivated land, but you mustn’t disturb or damage anything. You can pick mushrooms and berries, camp and make a campfire but don’t leave any traces behind. Freedom to roam is something we Swedes are enormously proud of and cherish. We hope that you will also do that when you visit us. Read more here about the rights and obligations regarding nature in Sweden.