I love Hjo! Experience the small town of Hjo in West Sweden

Hjo is a small-town idyll whose well-preserved timbered centre has become an important part of Sweden’s timbered-town heritage. Some of the biggest names in Swedish design grew up in this creative place. Hjo is also a fantastic summer town, with a long bathing tradition, a leafy park and a number of tempting ice cream cafés.

Hic Iacet Otium! Leisure rests here! These words, written in the sand, were left by a monk who had just stepped ashore in what is now Hjo after a particularly stormy crossing of Lake Vättern. Or so the story goes. The initials of the Latin phrase are HIO, which then became HJO. An odd coincidence, you might think, but still no one can quite dispel the well-known legend.

A timbered town of long traditions

A much more well-established fact is that Hjo  was granted its town charter as long ago as the early 15th century. Today the past constitutes a considerable part of the town’s particular charm. Together with Eksjö in Småland and Nora in Bergslagen, Hjo makes up the Tre Trästäder (three timbered towns) network, and in 1990 the town was awarded the Europa Nostra medal of honour for its estimable preservation of the entire timbered centre.

In Hjo you can stroll along cobbled streets and make your way down picturesque alleys edged by well-kept wooden houses from the 18th, 19th and 20th centuries. The houses in turn are often flanked by leafy gardens, and on your stroll your eye will be drawn to transomed and mullioned windows, and verandas decorated with the kind of wooden ornamentation Swedes calls ‘carpenter’s joy’ – snickarglädje. 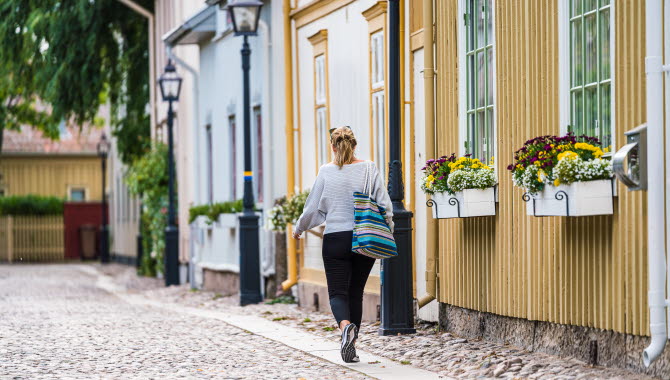 Walk along the Hjo river valley

There are a number of oases to discover in Hjo, including the verdant valley of the Hjo river. In the Middle Ages the path along the river was an important route for monks travelling between Alvastra, on the other side of Lake Vättern, and the monastery in Varnhem. Later the flow of the river became an important source of energy for forges, stamp mills and other mills along the river.

For young and restless visitors, the sculpture walk along the Hjo river is a great choice. Here they’ll meet five different fairy tale characters, beautifully carved in wood. As autumn days grow shorter, trout safaris along the river are another popular activity.

The Hjo river splits the town into two halves, with the oldest neighbourhoods on the south side of the river. Along Hamngatan you can visit the old customs house, a reminder of the era when traders had to pay a duty to cross the river with goods. Take the opportunity to wander up to the main square and the church. Along the way you can browse quaint little shops such as Njuta, which sells fancy chocolates and organic teas. 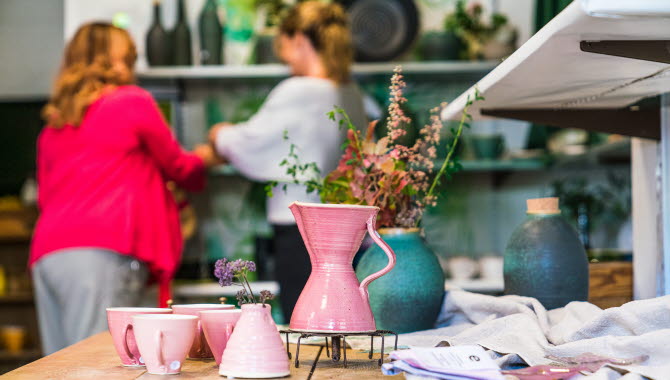 Ice cream treats by the marina

From the Hjo river’s mouth into Lake Vättern it’s not far to the Pedagogien neighbourhood, with the local tourist office, several interesting exhibitions, and a creative workshop for young and old. The town’s creative vein was particularly strong in Estrid Ericson, the local girl who founded Svenskt Tenn – today one of Sweden’s premier design brands – back in the 1920s. Together with Josef Frank she dared to go against the grain and transform Functionalist style – ordinarily very bare and austere – into something playful and homely. 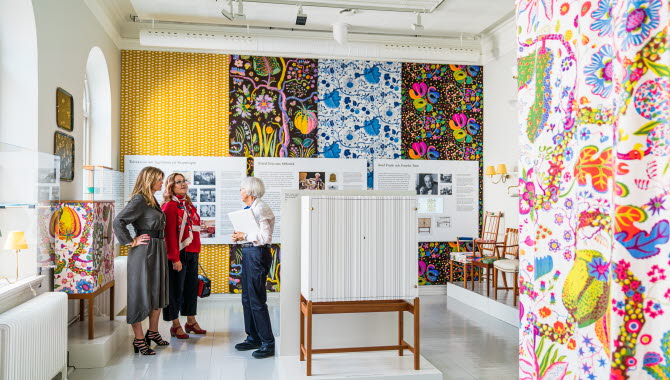 Then follow the scent of smoked Vättern whitefish from Hjo Sik (better known among locals as Feskeboa) to the cosy marina. In the summer it will be full of leisure craft, with the listed old steamer S/S Trafik ready to take passengers out to Visingsö, while crowds buzz contentedly at outdoor tables late into the warm night. 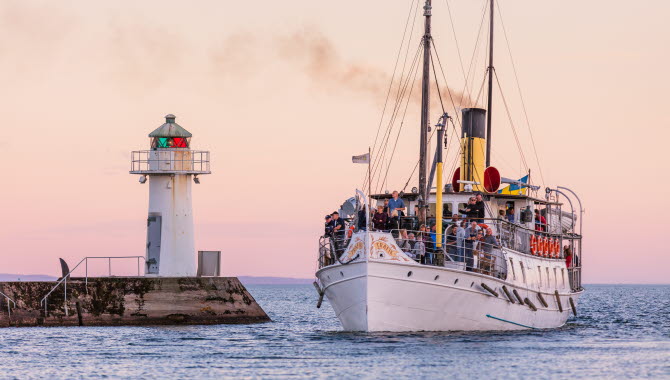 Moster Elins, one of the town’s three well-frequented ice cream cafés, is also here. The other two, Gula Paviljongen and Österhagen Glass, both sell their own ice cream made with cream and eggs from local farms.

Beyond the marina is Guldkroksbadet, with several pools and a beach where you can sink your feet into Hjo sand and enjoy refreshing dips in Lake Vättern. Access to the swimming area is free and this is a popular place, along with the waterfront promenade on the town’s south side, during warm summer days. 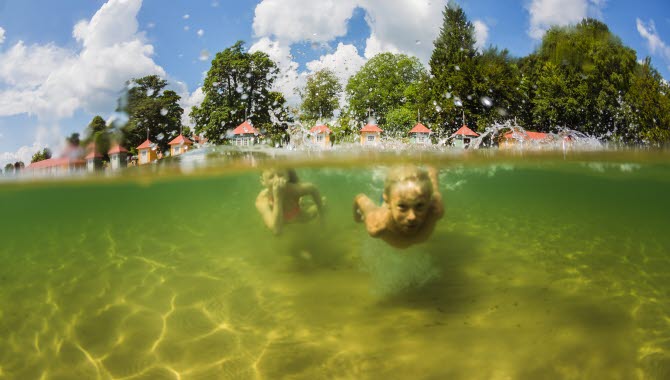 Wind down in the town park

The brightly coloured bathing huts by Guldkroksbadet have become an iconic image of Hjo, and are a significant part of the town’s history as a spa and health resort. Continue into the lush town park where the spa, Hjo Vattenkuranstalt, was founded in 1876. Even if the spa is no longer there, memories and impressions live on.

Some of the town’s best-preserved early 20th-century villas are in the park. They include Villa Eira, a B&B with individually decorated rooms that reflect historical figures from the town and are inspired by – who else – Estrid Ericson.

At the beginning of July every year the town park fills up with wood carvers, potters, weavers, tanners and smiths – along with thousands of visitors – at the annual arts and crafts fair, one of the biggest in Scandinavia.

In closing, we can’t talk about Hjo’s charm without mentioning the slogan – a real killer, in the view of many – devised for the small-town idyll by Lake Vättern to make its international mark:
I love Hjo. (yes, Hjo is pronounced ’you’) 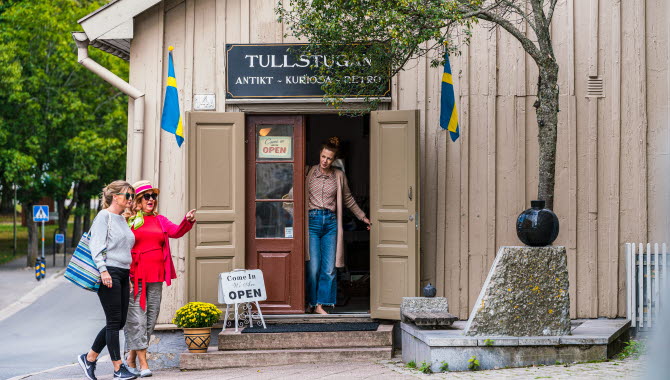